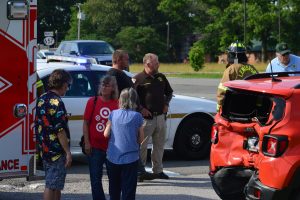 Hancock County EMS provided first aid at the scene of a three-vehicle accident at the intersection of state Route 657 and U.S. Hwy 60 in Lewisport, but no one suffered serious injury or required transportation to a medical facility. The accident happened at approximately 4 p.m. on June 17. Hancock County Sheriff’s Deputy Jeff Hendrick filed the accident report.

While traveling east on U.S. 60 in his 2012 Toyota Camry, Phillip E. Aubry Jr., of Owensboro, encountered an unknown vehicle sitting in the roadway at the intersection of state Route 657 and U.S. Hwy 60. Aubry went onto the shoulder to go around the vehicle. Aubry slowed his vehicle to approximately 20 to 25 MPH while going around the stopped car. Patricia E. Pannett, of Tell City, Ind. followed behind in a 2019 Jeep Renegade. She also went to the shoulder to go around the stopped car, but was traveling between 35 and 40 MPH, and slammed into the rear of Aubry’s car. Jarred C. Roberts, of Lewisport, was following behind Pannett’s vehicle in a 2013 Dodge Ram, when Pannett’s vehicle came to a sudden stop after hitting Aubry’s vehicle. Unable to stop in time, Roberts’ truck smashed into the back of Pannett’s Jeep.