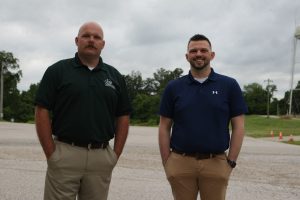 COVID-19 has affected everyone to some degree, leaving some without jobs or some with added restrictions, but for Damian Rice and Kyle Veach, their jobs are to combat the virus and stop its spread, all while being watchful of the spreading vitriol against anyone even loosely associated with law enforcement.
Rice is director of Hancock County’s 911 and EMS and Veach is the county emergency management director, and both have been busy protecting the public from the virus while protecting first responders from the dangers of their daily jobs.
Rice handles the day-to-day operations of 911 and EMS and Veach designs the emergency response procedures for things like natural disasters, large scale scenes and even terrorism, but in many ways their roles overlap.
“There’s a lot of things where our two roles collide,” Veach said,” especially when it comes to grant writing and things like that, or like the COVID-19 stuff, it kind of falls into both of our realms.”
When COVID-19 was declared a pandemic and whole economies across the world were essentially shut down, it fell largely to them to figure out what everyone in the county should be doing to keep safe.
“In the very beginning we had to make policy and procedures for the entire county, for EMS response, first responders, law enforcement, county buildings, schools,” Veach said.
“It isn’t something we already have in a book that says here’s what you’re supposed to do,” said Rice. They began acquiring hand sanitizer and personal protective equipment (PPE) to give to businesses and people who needed them. Some of the items were donated and others were provided by the government.
“We have sanitizer by the barrels,” said Veach. “We’re offering hand sanitizer and masks and stuff to every local small business in the county.”

Emergency personnel had to begin checking in with the at-risk population in the county, working with the senior centers and the schools as well as keeping in contact with local clinics and care homes.
“We’ve actually manufactured our own backpack sprayers out of air packs and paint sprayers where we can actually sanitize large areas,” he said.
Like any other disaster the county declared a state of emergency, which helps the county make faster moves and can help get the expenses related to the virus reimbursed in the future.
“We declared a state of emergency and it’s kind of hard to look out the window sometimes and there’s no snow, no ice, no tornado or flooding, but you look out and the sun’s shining and the grass is growing but we’re still in a state of emergency,” he said.

Ambulance crews have become necessarily careful, maintaining a six-foot distance when possible to determine whether a patient might have the virus, but even if it’s known they do, it doesn’t mean the crew can just leave.
“It’s our job,” said Rice. “We have the protective equipment that we need, so it’s just a routine call at this point.”
Volunteer firemen have been restricted from responding to many calls they would otherwise go to, just to minimize their potential exposures and prevent a possible spread.
“There’s times that you need more people but we’re trying to protect everybody,” he said.
“The fire departments they’re volunteers, so they go straight back to their families after a medical run,” said Veach.

After several months of the virus dominating procedures and conversations, both men say they believe the public is growing weary of the whole thing.
“In the beginning I was really surprised by how many people were actually following CDC guidelines and wearing masks and social distancing and staying home and things of that nature,” said Veach. “At this point people are inconvenienced by it but who knows what would’ve happened if we hadn’t.”

While the virus hangs around, threats from an increasingly tense public add more danger to the jobs of first responders, so much so that several area departments have provided bulletproof vests for emergency personnel.
“That’s been a cause for concern for years,” said Rice. “You’ve always had the people who are targeting first responders. Not even police.”
“To them a badge is a badge,” said Veach.
They told the story from several years ago in another state where a man set fire to his house and then shot the firemen as they responded.
“A lot of times we get called to stuff that what they tell dispatch isn’t what we go to. And you find that a lot,” Rice said. “It could be a routine medical call and it could always turn.”
“We had an incident two weekends ago where there was hostile scene and law enforcement was delayed and it very easily could’ve turned deadly if there’d been a weapon involved,” said Veach. “It was just one of those deals where you show up on scene and you’re told one thing and then something else happens.”
It doesn’t even have to be a person intent on hurting a first responder.
“Even like a diabetic, you fight those people,” said Rice.
They told how last year in Arkansas a diabetic man shot and killed a first responder who’d revived him from a diabetic episode because once he became alert he just thought a stranger was in his house.
“It happens more than you think when it comes to diabetics, people under the influence of alcohol or drugs, things of that nature,” said Veach. “You can very easily find yourself in a bad situation.”
dave.hancockclarion
@gmail.com