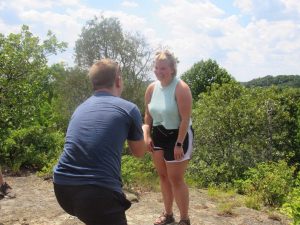 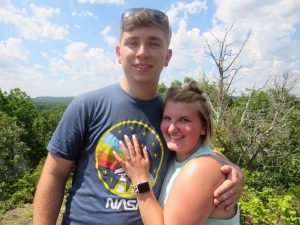 Last weekend was an exciting one for hiking enthusiasts, as the recreation area Jeffreys Cliffs opened to the public for the first time, but it was also an exciting time for a girl who hates hiking, because she got engaged on one of those newly opened trails.
Savannah Robbins, 20, went up the cliffs Saturday with her 20-year-old boyfriend Brandon Hunt, but she came down with her fiancé after a surprise proposal along the way.
“Me and one of my other friends we were kind of planning on going hiking and then we wanted to bring our girlfriends with us,” said Hunt.
He and Robbins had been talking about marriage, to the point that he even had a ring, but she wasn’t sure when or how he’d propose.
Saturday felt like the right time and the right place.
“I was like you know, it’s a pretty good opportunity to go ahead and pop the question when she’s not expecting it up there,” he said. “I knew that she was expecting it but I didn’t think she would expect it on a hiking trip.”
“I hate hikes,” Robbins said.
Even though hiking in the dirt and heat wasn’t high on Robbins’ list of things she loved doing, but she joined Hunt and their friends Savannah Swihart and Cameron Young, another young couple, on the trek to see what all the fuss was about the cliffs.
As they neared the top Robbins was having about as much fun as she expected.
“There’s this spot at the very top before you climb up the rock and I was almost in a ball, like I’m not doing it, you can’t get me up there,” she said. “And he usually doesn’t force me but he was pushing me, pushing me, and I was like you know what, whatever, I’ll just do it.”
Everyone made it to the top where the scenery stretches out for miles and climbers can look down on Domtar in the distance. After taking a short rest, Robbins and Swihart, the two Savannahs, started having some fun doing their best Forrest Gump poses.
“We were just goofing off, looking out,” Robbins said. “Cameron and Brandon were like oh yeah, you all should do that and we’ll take a picture. Well then I felt Brandon come up behind me and I thought he was just going to touch me and try to scare me, so in one of the pictures you can see me turn around enough to sass him and be like ‘don’t touch me.’
“And then he’s on his knee and I’m like, what are you doing? What’s going on here?’” she said.
He’d caught her off guard for sure, but then it was his turn to make the moment every girl dreams of as memorable as possible. Just not to him.
“Honestly I don’t even know what I said,” Hunt said Monday. “I remember getting down there and I remember standing back up but I don’t remember the 10 seconds in between. I was so nervous, I was just saying whatever was in my head.”
“I remember what he said. He was so nervous,” said Robbins. “He said something like ‘Savannah Rose, I’ve loved you for three years. Will you please marry me?’ And I was like oh my goodness, yes, yes!”
“He was so nervous he didn’t even put the ring on my finger. I had to take it from him. I was like, give it to me!” she said.
The cliff top view afforded nice engagement pictures, but it also had deeper significance to Robbins in the moment.
“My dad works at Domtar and he was working that day so I kind of like that I was close to him when it happened,” she said.
The couple is looking at tentative wedding dates in the fall of 2022, which should be after both complete their degrees from Western Kentucky University, both in psychology.
“We want to go ahead and get our college done and go ahead and get kind of settled into our careers so we’re kind of making a good income and we’re not stressed for money in the beginning of our marriage,” said Hunt.
“Believe me if we could get married any sooner I’m all for it,” said Robbins.
dave.hancockclarion
@gmail.com