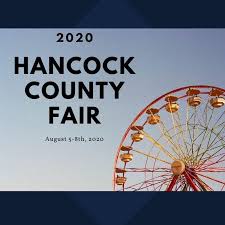 While the future of this year’s Hancock County Fair remains tenuous, work on the annual fair catalog is underway in order to complete the state-mandated catalog that doesn’t just lay out the schedule but unlocks a bounty of state matching funds.
“We have to have a catalog in order to get state aid,” said Franklin Powers, the fair board president.
The Hancock Clarion produces and prints the catalog and it’s sent to the Kentucky Department of Agriculture where they use the information inside to determine which events will be held and which ones will be eligible for funds.
Payouts to the winners in agriculture categories can get a 50 percent match from the state, up to $6,500.
“That’s all the animals, the stuff in the exhibit building, all of the canned goods, the baked goods, the women’s clothing, all that kind of stuff, kids sports goes in that category, all that type stuff,” he said.
Ag. department rules say that a fair must send in a rough draft of its catalog no less than 45 days before the start of the fair in order for the state to ensure that the publication meets all of its requirements in regards to content and public information, but that draft is also used to determine how much money the fair can get and when.
“The rough catalog is used to calculate the amount the fair will receive in its first fair payment,” the rules state.
“I’ve already sent in the paper where we’ve asked for state aid,” said Powers.
Getting that state aid is important for the fair.
“It’s very critical that we get that match on that money because if we didn’t then we’re just paying out a lot of money that we don’t have, really,” he said.
“A lot of times we get awful tight on money, OK… I’ve seen the time that that would just help us stay in business,” he said.
The catalog itself provides some funding for the fair through a percentage of ad revenue the fair board receives from the Clarion and publisher Donn Wimmer.
“Donn gives us some of the money out of the catalog,” Powers said. “We do good on the catalog.”
While the Clarion spends weeks putting it together, the rules and other information in the catalog comes from several people on the fair board who oversee specific areas like the demolition derby or the pageants.
“There’s a lot of people involved in this thing,” Powers said.
Having complete and correct information is important to visitors and participants, but it’s a requirement for the aid, which is only calculated based on what’s printed.
“You can’t just do something that’s not in the fair catalog,” he said. “If it’s not in the fair catalog you don’t get any money out of it, OK.”
With uncertainty surrounding COVID-19 and potential restrictions, the fair board voted earlier this month to wait until its July 7 meeting to decide whether to hold the fair as planned on August 5-8, whether to modify the date or even the fair events, or to cancel all together.
The catalog will be completed in time for the meeting and Wimmer told the board that changes to dates or anything else can be made at that time, but that if the board votes to cancel everything for the year he would simply absorb the expenses incurred in preparing it.
dave.hancockclarion
@gmail.com