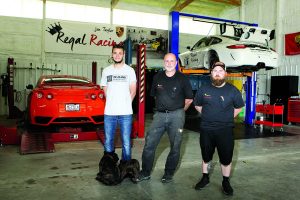 One of the last things a person might expect to find on a sleepy side road in Lewisport is a Porsche specialist and race shop, but that’s exactly what’s opening in a sprawling new building on 5th Street Monday.
Regal Motorsports, LLC, at 561 5th Street, opens to the public Monday and co-owners Tim Taylor, his son Jonathan, and Jacob Whelan say that although they know and race Porsches, they’re a full-service shop for any vehicle and almost any need.
“We specialize in Porsche and VW, anything European for the most part, but we work on everything and anything,” said Tim Taylor. “We do fabrication. We’ve got a machine shop, got a CNC plasma cutter, so we can make a lot of stuff for cars, or not cars, either one.”
The shop is an outgrowth of Regal Racing, the team Taylor formed when his son decided to take up racing three years ago. After running a race prepped Porsche Cayman S, Jonathan now runs a Porsche 911 GT3 Cup Car and was the national champion in Porsche Club of America’s Club Racing in the GTB3 category in 2019.
“The GT3 Cup Car is an actual factory built race car, so it never was a street car,” Tim Taylor said.
It comes with faster everything.
“I guess it’s a lot of fun. I never get to drive it,” he said.
Over his son’s three-year career the team has raced at famous tracks like Watkins Glen, Sebring, Daytona and Road Atlanta.
“We go all over. We race from Florida to New York,” he said. “It is very expensive.”
Taylor has been funding the car with money he made operating Industrial Concepts, a company he founded in Georgetown, Ind. that built robotic equipment for the Toyota plant across the street, as well as all of their plants in the U.S., Canada and Mexico.
He sold the company in 2012 and moved to Lewisport in 2015, around the same time that his son took up racing and had quick success. He built a new shop on land behind the home of his parents Russell and Martha Taylor and where his grandfather Bryan Taylor had lived before them.
As Tim and Jonathan got more involved in racing they met Whelan at DPatrick in Evansville, where he was the Porsche and VW specialist there, and they became friends and their go-to mechanic. Then a year or so ago they became partners.
“(Racing) got to the point that it’s got expensive enough that we need to start funding it other than out of my pocket,” Tim said. “We just kind of decided if we were going to do this we’ll just turn it into a business.”
Whelan is gold certified by Porsche of America, which means he pretty much knows all there is to know about fixing a Porsche.
“When it comes to Porsche there’s three levels: there’s bronze, silver and gold. Gold’s the highest level you can get,” Whelan said. “Once you achieve gold it’s master, more or less.”
He’s in rare company.
“I want to say there’s only 1,800 worldwide right now,” he said.
He grew up in Southern California and worked in speed shops before graduating from Universal Technical Institute and moving to Evansville to work at the dealership.
Now he’s part-owner of Regal Motorsports and its main mechanic, where his experience in hot rods has come in handy already as work has trickled through the door even before the shop is officially open.
They’ve already swapped the engine in a ’63 Bel Air, completely rebuilt a VW dune buggy, swapped TPI injection to EFI in a ’31 Chevy, and are finishing up an engine and front end on a ’62 Chevy II.
In the shop Tuesday alongside the Taylor’s race 911 and their Nissan GT-R was an old C10 on airbags waiting for maintenance and a Harley Davidson just in for a cleanup.
“Right now it’s at the point we’re just getting started, so we’d like to see just work in general come through the door,” said Whelan. “As long as I’m working I’m happy, more or less.”
There are big plans for the 6,000 square foot shop, which has four lifts and an entire fabrication section with CNC machines, a plasma table, a Piranha Ironworker and plenty more.
“We’re just now getting the machining side set up,” Taylor said. “(It’s) not strictly automotive. It can be anything… Any kind of sandblasting we do that as well.
One of those plans is to already add more space in addition to the 2,400 square foot building they have out back. Another 3,000 square feet is coming soon.
A major draw to the shop is also coming soon in the form of an AWD Dynojet that will measure horsepower at the wheels, a machine that is not only uncommon in the area, but most are just for two-wheel-drive vehicles and even those usually have a waiting list weeks or months long.
“Once we get the dyno and stuff, of course if somebody wants to bring their drag car down and see what it’s doing and whatever, we can do all that as well,” Taylor said.
Their specialty is in road racing setups, corner balancing and even offering trackside services, including driver training by Jonathan, but the guys emphasize that the Lewisport shop is open to anyone needing work done on any daily driver or specialty vehicle, even including UTVs and other small engines.
“We’re in a small town so we’re going to be doing small-town stuff,” Taylor said.
dave.hancockclarion
@gmail.com