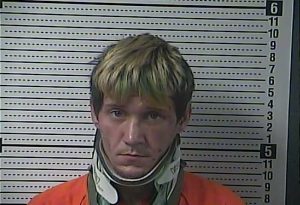 A Hawesville man is being held on a $850,000 cash bond in Boyle County after authorities say he led Harrodsburg Police on a high-speed chase that ended in a crash that killed an 18-year-old Lawrenceburg girl.

David Henderson, 30, fled after police attempted a routine traffic stop in Harrodsburg and the pursuit ended with a crash that killed Jill Hurst, a recent Anderson County graduate, and injured two others.