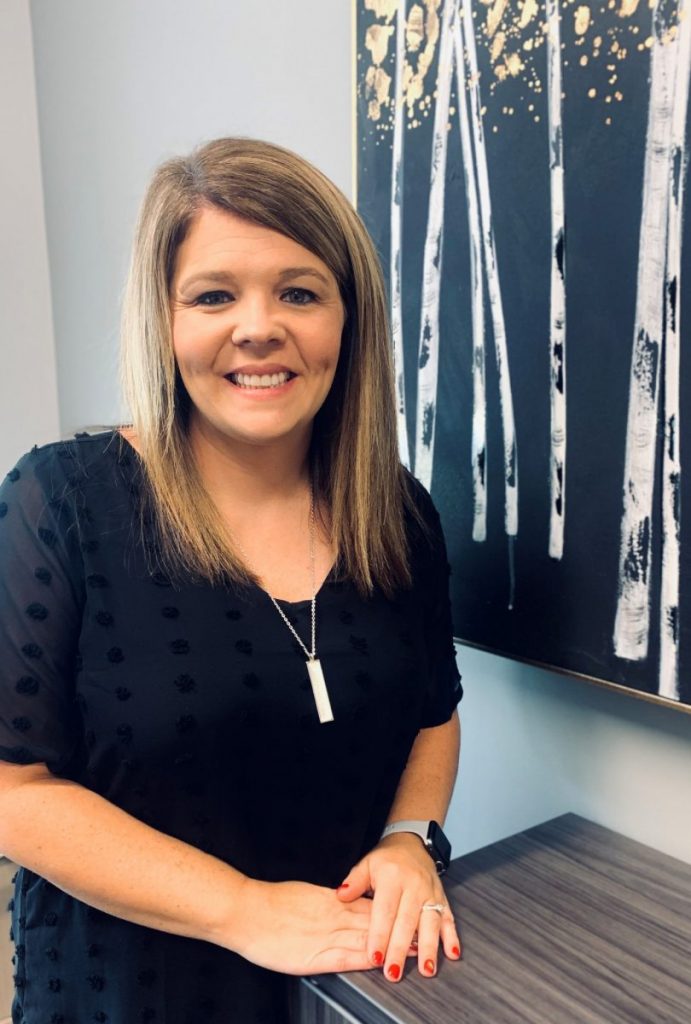 Ashley Walls, the new CEO for Labor Management Federal Credit Union, is a lifelong resident of Lewisport. “It’s a strong community,” she said. “The way that everyone pulls together when someone’s in need; you don’t find that in big cities. When there’s tragedy or triumph, the community rallies together for people and that is what hometown is about.”

She has been the Vice President of the Green River Mid Central Credit Union Chapter since March of 2022. She was on the Hancock County Chamber of Commerce Board of Directors from June, 2015-February, 2017 and is still currently a Chamber member. She is also on the Lewisport Cemetery Committee.

Growing up, Ashley and her siblings, Angel & A.J., were encouraged by their parents to help out in the community. Instead of spending a lot of time watching television and playing video games, they stayed busy such as with working alongside fellow citizens to clean-up the riverbank after the flood of 1997 and volunteering at Heartland Villa.

They were also involved in their scout troops and helped their grandfather, the late Junior Bolen, in his tobacco patch. “You have to give if you want to receive, in every aspect of life,” Ashley said. That is how her parents raised she and her siblings and she’s thankful for it because she says it taught them to consider others and not just themselves.

Ashley graduated from Hancock County High School in 2002 and studied at Eastern Kentucky University for a year. She started working at Labor Management Federal Credit Union in Lewisport as a loan officer in 2013 and was in the Senior Loan Officer position before filling the role of CEO at the beginning of 2023.

During her years of working at the credit union she has attended many conferences and completed trainings through the Kentucky Credit Union League. “It is a huge help for small credit unions,” she said. “They provide a lot of education and training.”

She loves her job and said it has been very “rewarding” to educate others such as on how to build their credit. “That’s what I love the most is just to be able to help people,” she said. “The way I look at it is, if it was me on the other side, how would I want to be treated? I would want someone to be honest and to care. There’s not much care in the world anymore. I always treated the members how I would want to be treated.”

She said that one reason she loves helping people with their finances so much is because of her own struggle. “I was struggling and I had no idea how to manage money,” she said. “I had a bad credit score. I had to work hard to come out of it. At times it was like, ‘Gosh, is it ever going to get better?’ But with time it did. It is just a slow thing. I feel like you appreciate more when you have to work for it.”

She and her husband, Aaron, will be celebrating their third wedding anniversary in February. They are blessed with 3 children: Cayden, Quaid and Tessa.

Ashley & Aaron spend a lot of their spare time attending the children’s sporting events. Ashley also cooks a lot of what Cayden brings in from hunting. He is an avid waterfowl and deer hunter and they make goose jerky, grilled dove and baked duck.

She said that she and Cayden are always looking for new ways to cook what he hunts. He cleans the animals himself and likes to experiment with different seasonings and cooking methods with his mom.

In October of 2021 she flew out to Colorado Springs to see her sister Angel and her husband Travis and her two nieces, Carley & Callie. She loved it Out West, she said, and most enjoyed visiting Joshua Tree and Garden of the Gods.

Ashley also enjoys spending time with her nephew, Anderson, her brother’s son.
A quote from one of her favorite authors, Melody Beattie: “Gratitude unlocks the fullness of life. It turns what we have into enough, and more. It turns denial into acceptance, chaos to order, confusion to clarity. It can turn a meal into a feast, a house into a home, a stranger into a friend. Gratitude makes sense of our past, brings peace for today and creates a vision for tomorrow.”

“She has several books that are very helpful,” Ashley said, “but I like The Language of Letting Go. It’s a daily reader that I read. It is inspirational.”