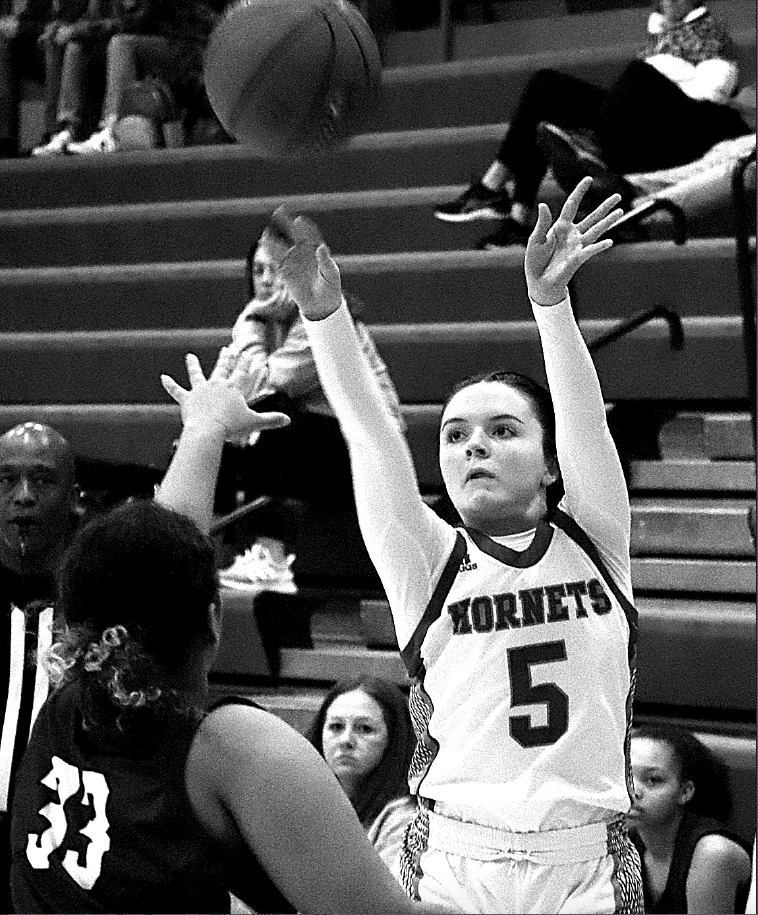 Bailey Poole scored 18 points and Emma Morris hit four 3’s during a 47-26 win for the Lady Hornets over Trigg County Saturday at HCHS.  The contest was the last of four games played in the House Insurance Coaches vs. Cancer Shootout.

Poole got rolling early as the senior point guard scored seven first quarter points, including a 3-point basket. Poole and Morris both hit from beyond the arc in the second and Hancock County led 20-18 at halftime.

The Lady Hornets dominated on both ends of the court during the second half. The team’s pressure defense was impressive as they held the visitors to just four points in each of the final two quarters. Hancock’s offense was nearly as impressive.

Lily Roberts scored twice inside and three times at the foul line, while Morris splashed back-to-back 3’s during a stretch that broke Trigg County’s will. The Lady Hornets cruised on the victory in the fourth frame.

Kendra Keown had a board and two assists, Sophia Newby had three boards and two steals. Ella House had two rebounds and one assist in just three minutes of court time. The junior is recovering from a ankle she injured at Owensboro.

The varsity girls absorbed a tough, 69-68 loss at Owensboro Thursday when the Lady Devils came from way behind to win.

Hancock County looked unstoppable in the first half, winning the opening two quarters by a total of 18 points. Lily Roberts buried four first half 3’s and Poole, Morris and Ella House all connected from downtown as well. The Lady Hornets led 17-9 after one quarter and 39-21 at intermission.

OHS battled back in the third when Alyrica Hughes led a comeback charge. Hughes scored 13 third quarter points and the Hornets’ lead was reduced to just three points. Hancock County got a tough break when Ella House injured her ankle during the frame. The junior was having a great game with 18 points through three quarters.

The two teams fought down to the wire in the fourth. Roberts hit another “3” and so did Morris. Poole was 4 for 4 at the line and Newby scored off the bench, but Hughes and CJ Paige led the way as the home team pulled out the one point win.

Roberts had a huge game with 28 points (five 3’s), 10 rebounds and three assists, and House finished with 21 points, seven boards and six assists. Poole had 10 points and five boards, Morris had seven points, two boards, two assists and three steals, Newby had two points, and Gay and Keown had two rebounds each.

Hughes finished with 29 points for OHS.