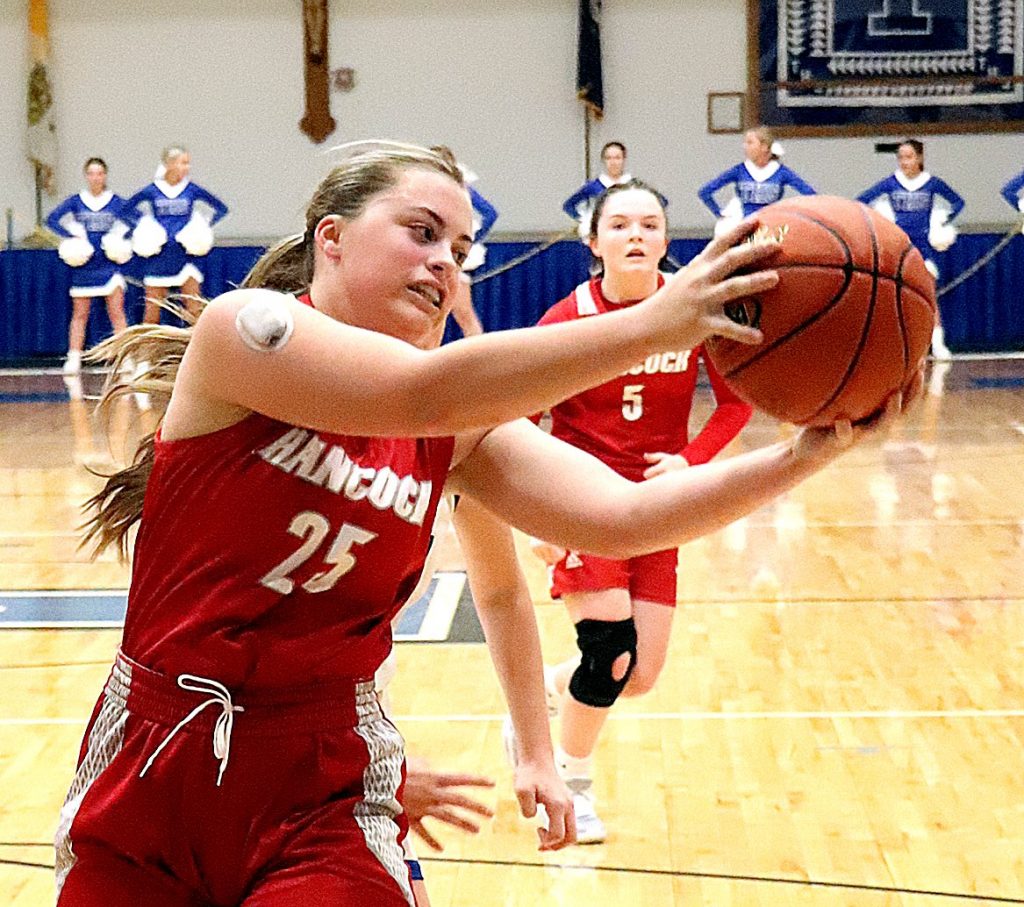 “Our girls came out and did what you’re supposed to do when you’re the better team, HCHS coach Kevin Husk said. “Emma Morris broke a single game record with 11 steals. That record was set in 1976 so that was really cool to see.”

Bailey Poole caught fire in the second as the senior buried three shots from downtown. Roberts and House continued to score and Morris found the mark on another shot from beyond the arc to help Hancock County to a lopsided halftime score of 48-9.

Coach Husk eased off the defensive pressure during the second half as his opponent was clearly over matched. The Lady Hornets forced 39 turnovers for the game.

Daviess County grabbed the lead in the first quarter and never trailed during a 63-48 win over Hancock County in Owensboro Tuesday.

“I thought our girls played really hard. We had players out and nearly every girl was battling through not felling well,” coach Husk said. “I’m extremely proud. Giving your best when you’re not 100 percent is a life skill that these ladies showed they have.”

The Lady Hornets battled from behind only to fall 66-56 to South Spencer during the team’s home opener last Thursday.

“We were down three with two minutes to go and just didn’t execute well enough to win,” coach Husk said. “This was a good game for us because they really pushed us and we were able to see the areas that we need to improve. They’re a really good team.”

Hancock County looked strong offensively early on when House scored four field goals during the first quarter. Poole splashed two 3’s and Roberts hit from beyond the arc, but the Lady Rebels were even better. South Spencer won the first frame 21-18 before coach Brent Matthew’s team locked down defensively in the second.

Morris canned two 3’s after intermission and the Lady Hornets began to claw their way back. Hancock County won the third period 16-14 and two made free throws by Keown pulled the Lady Hornets to within eight points of the visitors early in the fourth. A steal and a basket by Poole made the score 52-46 and the senior later buried a “3” to pull her team to within five points.

Two made foul shots by House made it a three point game with under two minutes to play. Britton canned two from the line and the Lady Rebels pulled away down the stretch.

“I know this group is hungry to do some special things and I know we’ll take this and get better from it,” Husk said,.

South Spencer shot 56% from the field while Hancock County shot 31%. The Lady Hornets won the battle of the boards 40-30.