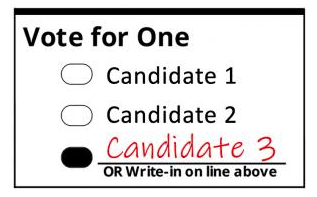 The two write-in candidates for Hawesville City Council are Joan King and Justin Basham. Joan is the wife of current Hawesville Mayor Charlie King who is seeking re-election.

There are nine city council members running for re-election on November 8 – four on the Lewisport City Council and five on the Hawesville City Council. In addition, there is one write-in candidate for Lewisport as well as one new candidate. Aforementioned are the two write-ins for Hawesville.

Those currently serving on the Lewisport City Council and running for re-election are: Josh Roberts, Marsha Johnson, Mary Margaret Hawkins and Kelly Vanover.

The write-in candidate on the ballot for the Lewisport City Council is Victoria “Tori” Shively. She is currently serving in the interim after Wes Pate resigned from his seat in September of this year. It was voted on and decided by the council for Shively to temporarily fill the empty seat until the election. Former Mayor Josephine “Josie” Hagan is running as a new candidate.

The deadline to file as a write-in candidate was Friday, October 28.