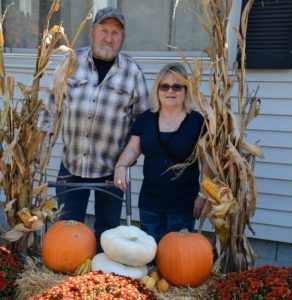 It was on a October day in 2021 when Chuckie and JoAnn Duncan along with their grandaghter, Brooklin traveled to get fall decorations their home and were seriously injured in an automobile accident.

It has been just over a year since Charles & Joanne Duncan and their granddaughter, Brooklyn Conkright, were seriously injured in a wreck on Thursday afternoon, Oct 14, 2021 in Hawesville.
Charles “Chucky” Duncan was driving his 2006 Chevrolet Silverado truck, with Brookyn sitting in the middle seat and Joanne next to her on the right.

They were heading westbound on U.S. 60 just west of the intersection with state route 69 and U.S. 60, when Tonya Godsey, of Irvington, KY, struck them from behind.

They all 3 suffered multiple injuries and Godsey (the woman who hit them) wasn’t injured. Joanne & Charles were both flown to University of Louisville Hospital. Brooklyn was taken by ambulance to Owensboro Health and then flown to U of L Hospital that night.

On the day of their accident, they were out getting fall decorations for their home. They drove to Woosley’s to purchase the items such as pumpkins, straw and mums. They got everything they needed, loaded it into the truck and started back home.

Charles said he remembers it all very well. “We pulled out from Hwy 69 to head home, going up towards Bills on the Hill and the lady ran into us from behind,” he said. “I got up to probably 40 mph or so and next thing I know, she had run into us.”

“I looked back and could tell that it was a maroon vehicle. She went to the left and when she did, she knocked me off to the right and we hit that tree right off to the side of the road.” They were knocked down into the embankment and then into a tree.”

“I got a great big red mum from Woosley’s,” Joanne said. “I was glancing around to see if it was still back there and that’s when I looked up and saw her going up under our bumper. I looked at Chucky and he was really fighting it. He was putting the breaks on but it didn’t do any good because the lady’s vehicle had lifted us up off the road. I was in-and-out and kept feeling for Brooklyn because I knew she’d be scared to death. I remember telling her one time, ‘It’s going to be o.k.’ She was hollering, ‘Pawpaw!’ And he was sitting out beside the truck. I was unconscious – off and on. I’d come-to for a few minutes and then I’d go out again.”

“I had gotten out,” Charles said. “Her (Joanne’s) leg was in two and bones were sticking out. I thought, ‘I’m going to have to get out and go on the other side.’ I had in my mind to wrap it up or something (her leg). When I got out, I realized I couldn’t walk. I was hurting real bad and I couldn’t breathe real good. When I looked down I had one foot going backwards. I had my shoes on and I had one pointing one way and one pointing the other way. I was bleeding from my knee down and I thought, ‘Man, I can’t walk. I can’t do anything.’ I sat down in the grass and they finally got there.

I told the ambulance crew, ‘Cut that leg on off and just throw it to the side and tend to them inside the truck. I’m alright.’ The paramedic said, ‘Man, you cut an artery. We’ve got to get you to quit bleeding.’ They wrapped me up and it kind of quit. They got her (Joanne) out real quick and took off with her in the helicopter.”

Charles had both knees fractured, five broken ribs and a foot that was barely still attached and hanging. Brooklyn had a broken leg and her hip had come out of the socket. “They took Brooklyn and I in the ambulance,” he said. “They took us down the road and we didn’t go very far and stopped. They opened the door, I heard a helicopter and they said they were going to load me up. They loaded me into the helicopter and took Brooklyn to Owensboro. That night, they flew her to Louisville (University of Louisville Hospital).”
Brooklyn also had a very bad cut below her lower lip and a lot of nicks and cuts. Charles said they treated her so well that you can’t even tell now where those abrasions were. Her leg is still not completely up to par though, he said. “It’s doing better but she’s got a little bit of a limp still,” he said. “It sure changed her life. It changed my life, for the most part, too. I’ve got to do things now that I never had to do before. Anything I want to do, I’ve got to either have help or have my walker or a wheelchair. I can’t get around. It’s in my foot. It’s my ankle bone.

They say that it’s going to get better but I don’t know. I still can’t walk on it. It hurts. I’m always going to be crippled a little bit. It’s just not going to ever go away. It ripped it all the way around (the right ankle). It was just barely hanging. They said that, eventually, it was going to be alright. But I took an infection in it and it swelled up. They said they didn’t think it still had infection in it. I have to go back in December and if there is still infection they talked about going ahead and taking it off. Right now, I’ve got four bolts and a rod in my foot. It won’t move.”

Joanne is getting better but still has swelling that stays in her legs. “I’m trying to throw away my walker,” she said.
The accident has really changed their lives in many ways but they are determined to get out and do the things they love to do. “I’m doing some trapping but most of it’s on a 4-wheeler or Brooklyn helping me,” Charles said. “Last year she went on by herself. She said the airport had called me again and I said, ‘Brooklyn, I am not going to be able to do it.’ And she said, “I’m going to do it. I’m going to try.’ So she went on. She is doing better. She climbs on the fence – you have to set the snares up on the fence and she can climb up there. She caught 3 or 4 coyotes and 6 or 7 foxes.”

Brooklyn graduated from Hancock County High School. Her last half of her senior year she did some homeschooling and online classes. “She was taking therapy and going to the doctors about every week. And, so they worked it out so she could do that,” Joanne said.

Charles has hunted all his life. He was going deer hunting with his muzzle loader and Brooklyn was ready to go hunting with her “Papaw” on the day they were interviewed last weekend. “I get on the 4-wheeler and put my walker on it and I drive as close as I can get. The doctor told me not to climb any trees. But, I got up on top of one today. I did more pulling than climbing and didn’t put much weight on my foot.”
He says their medical bills have mostly all been paid. Their insurance paid for a good part of it but they have had to pay out a couple thousand. They have not received any compensation from the driver who hit them yet and have been paying their lawyer fees as well.

Their lawyer is still working on the insurance of the people who hit them, Charles said. “They had a 50-20, that’s the state minimum insurance you’ve gotta have to get on the road. I don’t really know what the 20 is, but the 50 is the part that goes to us.

You’re talking about a lawyer fee for Joanne, Brooklyn and myself and then the guy that was riding with the lady who hit us claimed that he got hurt. It’s taken a year. It is still pending. He didn’t say anything for about 6 months and then decided to say he was hurt. She (the driver of the vehicle that hit them) wasn’t hurt.”

Charles said he’s going to go on trapping and hunting like he always has. “Just try to live life as normal as possible,” Joanne said. “And do the best we can with it. A lot of times, I like to go to Walmart, like any other woman, but I’ll end up taking my walker with me or my wheelchair – just depends on how long I think I’m going to be in there. You’ve got to think of this stuff ahead of time or else you’re going to be sitting in your car and can’t go anywhere.

Chucky, he gets his wheelchair out and gets in the store and I kind of push him around and he gathers up stuff.”
Joanne still cooks and Brooklyn skinned the animals she trapped and hunted last year on her own. “I can still get out there and sit in the chair and I’ve got a hoist rigged up out there. I skin for a little while and then I have to raise them up a little bit,” Charles said.

He’s retired now from 32 years at the tile plant – American Olean. “I was looking forward to retirement. I was going to fish and hunt and do what I want to. Now, everything has changed. When I retired, I had a bout with cancer and most of my retirement went to that – paying bills and the insurance wasn’t real great. But, I was determined I was going to get out of there and enjoy myself and now all this has happened and it’s just different.”

“We have had a lot of help compared to most people,” Joanne said. “His brothers took turns coming up and staying with him. I’ve had friends come and take me out. We’ve just had a lot of help and we’ve really appreciated it.”

Charles & Joanne are both 66-years-old and have been married for 48 years. Brooklyn is 18 now. Her parents are

. She lives in Owensboro with her family and visits her grandparents frequently in Hawesville.