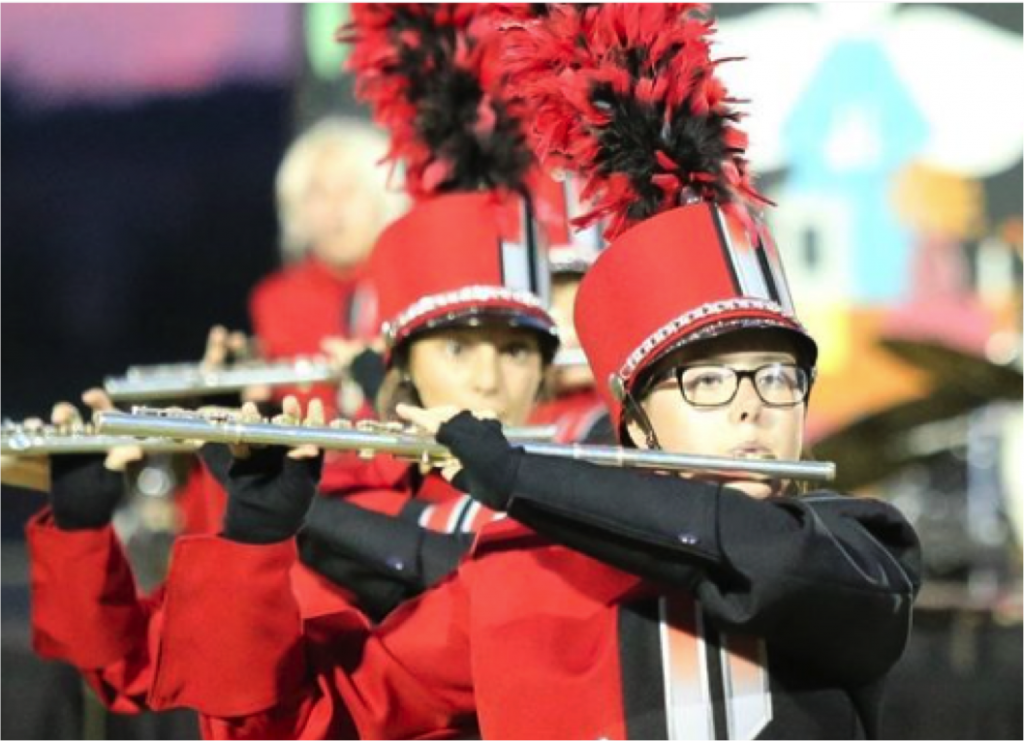 Hancock County High School Marching Band has been racking up the winnings over the last couple of weeks. Their last competition “The Dragon Classic” was Saturday, October 1 at Warren Central High School in Bowling Green and they won First Place in their class and Best Overall Color Guard!

HCHS Marching Band Director Zachary Buskill is very proud of their accomplishments. “The Color Guard winning Best Overall was particularly impressive because it was extremely windy,” he said. “It was amazing how well they performed despite those conditions. Our Color Guard Instructor, Emily Rohrer, is in her second season with us. She is awesome. She has done a great job with our Color Guard students. We would not have been able to do that without her.”

The HCHS Marching Band show theme this year is titled “Swan Song” with narrative based on that legend. “The idea is: What does the swan sing for? And so, that’s what the show is about,” Buskill said. The music featured throughout their show is Swan Lake, by Tchaikovsky; My Immortal, by Evanescence; and Firebird, by Stravinsky.

“We actually haven’t performed the entirety of the show yet,” he said. “We still have a few things to add at the end. As you progress through the season, you’re still adding material for the show. The idea is to add a little more each week. How long or short each competition is plays a factor in how long it takes to have the entire show on the field. This is a longer show, which is why we are still adding materials into it.”

The students practice 15-20 hours a week along with their weekly competitions, every day except Sunday. On weekdays, they stay after school and practice until 5:15 and they also try and get 1-2 hours of practice in, Buskill said, before each competition.

Their upcoming competition is this Saturday, October 8 in McLean County at 7:00 p.m. This is the last regular season competition they will have so make sure and support them by attending and cheering them on!

The following Saturday (October 15) there are no band competitions due to fall break. Saturday, October 22 they will have their Regional Competition for All Class 2A Marching Bands on the westside of the state at Warren East High School. This will lead up to the Semi-Finals on the morning of Saturday, October 29 at Bryant Station High School and the State Championships that evening at Eastern Kentucky University.

“We just try to improve each week,” Buskill said. “The idea is to get very close to finishing the show, as far as having it all on the field. We know the areas that we need to improve in and the students know as well. We are each trying to improve so that when that state level competition begins we’re ready for it.

We all feel excited about it. I think we’re all really looking forward to it. That is, kind of, what the goal is all year – is that you’re working toward that moment (the championship). So much work goes into it. For us and for the kids especially, it’s just really exciting when what you’ve been working toward for so long is about to happen. I would say that for all kids who do this across the state, the goal is the State Marching Band Championships. We hope to do really well like we have the past few years.”

Zachary’s parents, Jamie & Ann Buskill, contribute to the HCHS Marching Band in a wonderful way. They prepare delicious food for the entire band at each competition! They did the sa

me when he was in Daviess County Marching Band and he says they are “experts” at setting-up and cooking for large groups of people.

They do this free of charge and serve great food like pork chops, mashed potatoes and Mexican cuisine at the different events, to name a few. The students always enjoy and appreciate it and he says they are looking forward to the steaks his parents will be cooking for them at the State Championships this year.

Zachary Buskill was born and raised in Owensboro. He earned his Bachelor’s in Music Education at University of Kentucky and his Master’s of Music at Western Kentucky University. He teaches Concert Band, Jazz Band and Marching Band at HCMS and HCHS. He also teaches saxophone lessons to students at Kentucky Wesleyan College and is in the KWC Wind Ensemble. He played in the Owensboro Symphony Orchestra Second Street Big Band for 4 years. His wife is Charlotte Buskill.