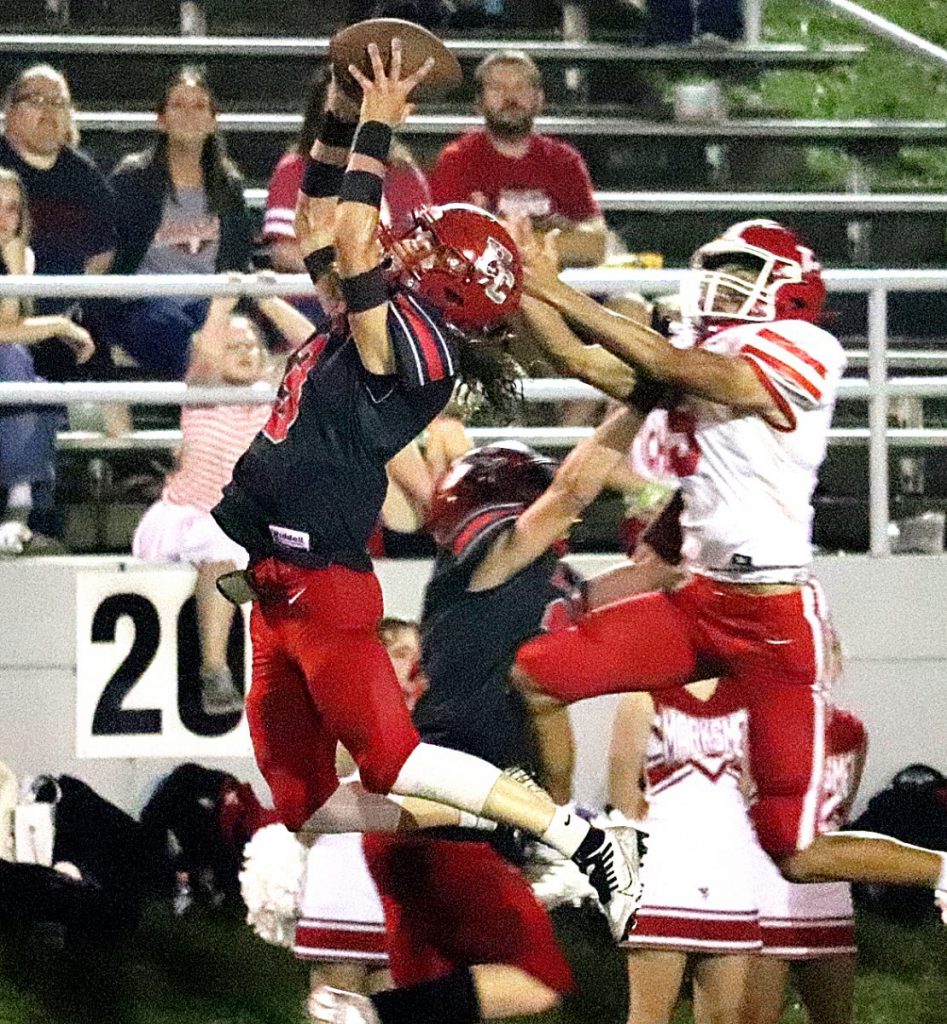 Austin Volocko intercepted a pass during the final moments to secure a 16-13 victory for Hancock County over Tell City last Friday at HCHS’s Schafer–Glover Field. It was the first annual Battle of the Bridge.

“We knew this was going to be a tough game. Tell City has tough kids and they came ready to play,” HCHS coach Bobby Eubanks said.  “Overall, our defense played great. We gave up two big plays and that was it.”

The Marksmen took the opening kickoff and on the second play from scrimmage Tell City’s Noah Terry took a handoff and ran untouched for an 88-yard touchdown.

The Hornets looked to answer right away and Logan Willis ran behind the HCHS offensive line for good yardage. Kaleb Keown then made a nice reception on a sideline throw by Cole Dixon. The perfect pass and catch covered 39 yards to the Tell City 19 yard line.

Hancock County later faced a fourth–and–two at the 11 yard line when Dixon connected with Keown again. The reception was good for a first down and on the next play Alex Basham took a pitch and raced around the left side for a 7-yard TD. Basham then ran right up the middle for an easy conversion that put the Hornets on top 8-7.

The Marksmen countered with a long offensive drive led by Tr

enten Cail. The series consumed the remainder of the first quarter.

Tell City faced a fourth down at the Hornets 10 yard line when Tyce Dupont looked to pass. The senior quarterback was hit hard as he threw and his pass was intercepted by Volocko in the end zone. The Hornets big play maker with the unmistakable long hair returned the ball to the Hancock County 44 yard line.

Jack Duncan took a shovel pass and picked up a big first down for the Hornets at the Marksmen 36 yard line.

Hard first down runs by Willis gave Hancock a first–and–goal inside the 10 yard line. Dixon later took off on a race to the pylon and was taken down at the one. Basham came in and on fourth–and–goal the powerful junior scored. Drew Lyday fooled the defense on the conversion try to give the Hornets a 16-7 advantage with seven minutes remaining in the first half.

The Tell City running game was dominating on the ensuing possession when they reached the Hornets’ red zone. At that point the Hancock defense stiffened and stopped the Marksmen cold. The Hornets forced a turnover on downs and the two teams went to their respective locker rooms for halftime.

The Hornets received to begin the second half and Willis carried tacklers for multiple first downs. Dixon then scrambled for a long run up the visitor’s sideline and Hancock County was in Marksmen territory. The drive later stalled and the Hornets had to kick the ball away.

The HCHS “D” shut down the Marksmen offense and forced Tell City to punt the ball back to the Hornets. The ball was chipped to the right side and Hancock’s Landon Garrison tried to scoop up the ball. Unfortunately he missed and Jack Hammond picked it up and ran down the sidelines. The Marksmen took possession at their own 28 yard line after the return was nullified. By rule, the team who punts can not advance the ball unless it was controlled by the receiving team.

A big hit by Aiden Weatherholt brought up a fourth down for Tell City, but Terry picked up good yardage and a first down on a run around the right side as the third quarter came to a close.

The Marksmen faced another fourth down at the HCHS 15 yard line when Volocko and Ross Powers stopped the attempt short of the line to gain.

Willis and Duncan picked up big first downs for the Hornets but the drive later stalled and Tell City took over the their own 13 yard line.

It only took one play for the Marksmen to strike. Dupont threw a perfect pass to a wide open Kelby Glenn who was streaking up the field. Glenn made the grab and raced into the end zone for an 87-yard TD reception. A 2-point conversion try failed, but the Hornets were in a real game, leading 16-13 with 8:38 on the clock.

Again it was Willis and Duncan carrying the load on offense for Hancock. The two seniors picked up first downs, but the Marksmen stepped up and forced another punt. Volocko pinned Tell City at their own five yard line with 4:43 remaining.

Dupont ran for a first down across the 20 yard line and Terry advanced the ball to the 39, but the clock was ticking away. Dupont later went to the air again but this time Volocko jumped in front of the intended receiver and picked off the pass. Volocko celebrated as he ran up the Tell City sideline and the Hornets escaped with a narrow victory in the first ever matchup with the Marksmen.

“You have to be able to win tough games like this. You’re not always going to score 50 points, so to hang on and get the win was big for us,” Eubanks said.

Willis ran for 111 yards on 15 carries to lead the Hornets rushing attack. Dixon and Duncan each gained 26 yards, and Basham and Jack Roberts had two yards each. The Hornets gained 167 yards on the ground.

Dixon was 4 of 14 passing for 82 yards. Keown had two receptions for 54 yards, and Duncan caught two balls for 28 yards.

Weatherholt had a big game defensively with 21 total tackles. He had two stops for a loss. Duncan made 17 stops, with one TFL, and Powers had 13 tackles (two TFLs). Braydon Wathen had a fumble recovery to go with nine tackles and one TFL. Basham made eight stops (one TFL), Roberts had six stops (one TFL), Colin Johnson and Garrison made three tackles each, Chris Gillispie had two, and Lawson Ward, Aaron Garrett, Luke Pritchard and Hayden Shearn all made one tackle each.

Dupont was 1 for 4 through the air for 87 yards, with one TD and two INTs.

Terry led Tell City on the ground with 142 yards on 13 attempts. The Marksmen rushed for 283 yards as a team.