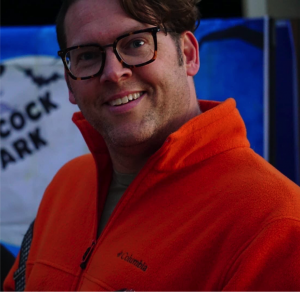 David William “Dave” Taylor passed into eternity on September 5, 2022, at home after a long battle with cancer.  However, don’t dwell on the word cancer, because as you’ll read, this is not who Dave was.  It was simply a part of his journey.  Born December 8, 1975, to William David and Kathy Taylor, Dave was a graduate of Hancock County High School and earned his bachelor’s degree in Journalism from Western Kentucky University.  He had a long career in print and photojournalism and was most recently the news editor at the Hancock Clarion. Dave also was a longtime member of Hawesville Baptist Church where he put his talents to use weekly in their audio and video department.  He was preceded in death by his grandmother, Irene Taylor; and his two dogs, Lech Walesa and Little Face.

Dave is survived by his parents, William David and Kathy Taylor; wife, Jamie D. Taylor, who is known to have her PhD in Dave’s Uniqueness and her son, Jackson; his sister, Georgia (Scott) Smith, and their children Mitchell and Julia; his two bonus children, Lane Cox and Ike Tongate; and his uncles, Dan Taylor, Lee (Carolyn) Cessna, and Tony Cessna.

But who was Dave behind such a grand, unrepeatable curtain?  Some writings from Dave himself gives those of us remaining, a small glimpse.

Dave loved the feel and look of leather.  So much, that as a kid he begged his grandmother to make him a set of full leather pajamas. She did not.

Dave was so self-conscious, or possibly vain, that he watched himself adjust his glasses several different ways in a mirror and choose the method that looked the coolest.

Dave had a collection of almost 20 steering wheels in his garage, mostly from Volkswagens, because he kept finding deals on them in junkyards.  He used to make a point that whenever he was in a new town for more than a day, he’d find the local “pull-it-yourself” yard and spend hours in there looking through junk cars. He would always inevitably find some great deal on a part for cars he either had or planned to have.

One of Dave’s greatest loves was also his greatest moment of shame; when he applied to go to the school of architecture and furniture design at the University of Kentucky. He had been told he only needed to be able to sketch his ideas out, however, during the test he saw these brilliant artists with incredible skills, and he had to place his horrific elementary school drawings beside theirs in a hallway display and he wanted to run out of the building.

He also enjoyed long drives because he could wander and make as many stops as he wanted. On his last drive home from Colorado, he added 10 hours to the trip by simply walking around Walmart and looking at random downtown spots. Dave could daydream like a champ. It was one of his favorite things to do and he often said he did his best thinking when he was supposed to be thinking about something else.

The service will be 11:00 a.m. Saturday at Hawesville Baptist Church in the Family Life Center, where visitation will be Friday, from 3:00 p.m. – 7:00 p.m.  Care by Glenn Funeral Home and Crematory.

The article he wrote on a weekly basis, titled, “What I’ve Learned from Dying” gives the thoughts and inside view of what Dave was thinking throughout this part of his journey.  But the last writing tells the story of what he wanted us all to remember.

“I’m a car guy, a furniture guy, I love traveling, I love writing, I love photojournalism, I’m messy, I’m competitive, I get snobby about things that don’t even matter like styles of silverware, I love God, I can’t get rid of magazines, I miss eating food, and I watch a lot of baseball. And lots, lots more.”

Memories and condolences may be offered online at www.glenncares.com.