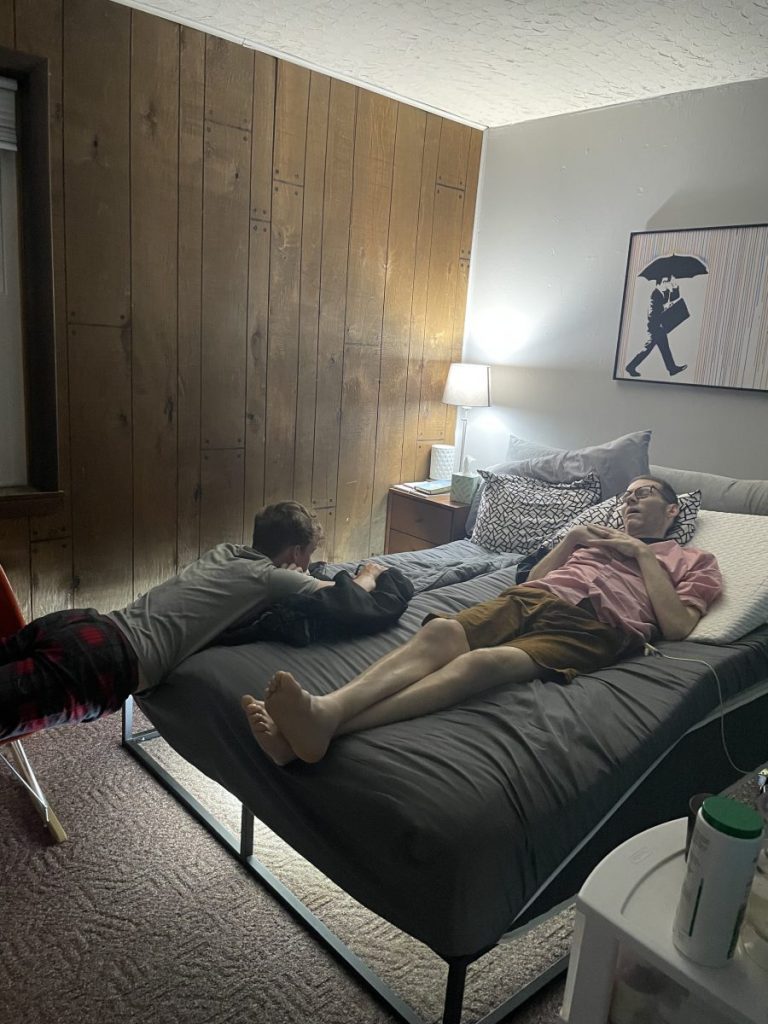 Davie and his stepson Jackson relaxing at home.

Something happened Sunday that made me feel so loved I just had to write about it.

It involved, of course, my wife Jamie.

As a part of my illness I spit up into a red SOLO cup that I always have on me and my wife has made it plain that she will do a lot of things for me but she wants nothing to do with my puke.

Well on Sunday as we were in the middle of singing a hymn at church I began to spit up. Now this isn’t anything abnormal, but this time the cup was a lite bit full and the spit formed a big bubble in the cup that threatened to run down the side, as it has many times before.

Right as the bubble began to form on top of the cup Jamie saw it and stepped in front of me and placed her hand over the cup so people couldn’t see the bubble pop in my face, or else run down the side of the cup.

The way she just jumped into action to try to shield me from others was touching to the point that immediately knew I was going to write about it. It made me feel so incredibly loved that she would jump in and cover my spit with her hand when I know how much she’s opposed to having anything to do with it.

A while back I wrote a column titled something like “Everybody needs a Jamie” but I feel led to expand on it because I have so many people in my life who love me just the same.

Everybody also needs a… Georgia. She’s my sister who goes way, way out of her way to be there for me despite the fact that she lives three hours away.

She has literally driven three hours in the morning just to be with me for doctor’s appointments and then driven back home right afterward.

As I write this she’s sleeping on the sofa in my living room, having driven in to take care of me for a couple of days while Jamie has to be at our other place in Brownsburg, Indiana.

It feels like there’s nothing we could ask that she wouldn’t do at the drop of a hat.

Everybody needs a… my parents. This one is a given I suppose, but not everyone has parents as supportive as mine. They’ll do anything for me even when they don’t really have the resources and shouldn’t put themselves out, especially since they’re both in failing health themselves.

I can’t count the number of times they’ve picked up medicines for me at the pharmacy, including times when I call and the pharmacy is closing in a matter of minutes and I’m desperate for my meds.

My dad has also driven me to countless appointments and they are willing to do anything for me even when it should be beyond their means.

Everybody needs a… Lane. Lane Tongate is my former stepdaughter but even though I’m no longer married to her mom she and I have kept a close relationship and I still love her as a daughter.

Lane has stayed with me numerous times at the last minute, coming by to make sure I’m getting my medicines in a timely manner and how I’m supposed to be getting them. She is busy with a child herself so the fact that she’s willing to come by at a moment’s notice to take care of me shows me that she loves me too.

Everybody needs a… Jackson. Jackson Hunt is my newly-minted stepson who, at just 16 years old, still does quite a bit to take care of me. He and I mostly joke around but he’s very protective of me and he always opens doors for me and carries my things so I don’t have to. He’s very handy to have around.

Everybody needs a… Richard. Richard Basham is one of my closest friends even though he and I are nearly a generation apart in age. He has been there for me through all of my automotive needs, even hauling my 79 Bug three hours each way using his own truck and trailer because he knew I couldn’t do it on my own. He’s also taken several of the large car parts that I’ve sold, including an entire engine, and shipped them for me to buyers when I physically couldn’t do it myself. Plus Richard is good at taking parts off my hands when I just don’t want to take the time to sell them. He’s been an automotive lifesaver.

Everybody needs a… my friends. My friends have been amazing. Jimmy flew in from Colorado back when I was told to go on Hospice, Jared drove up from Texas around the same time, Jeff has offered me rides to ball games and a chance to hang out and do something other than talk about cancer and John has hung out with me just to remind me of the good old times.

Everyone needs friends like I have, who are so giving of their time and so caring and so willing to help in any way I need.

I could fill a book with the others in my life who’ve been super supportive, from Mike Boling’s family putting on fundraisers to neighbors and others who’ve mowed my yard without being asked.

The point is I’m supported here far beyond what I deserve. I love my community in Hancock County and I’m so blessed to be sick here rather than anywhere else on Earth.

I hope I can repay everyone for their kindness one day and I hope I make you proud.
dave.hancockclarion@gmail.com