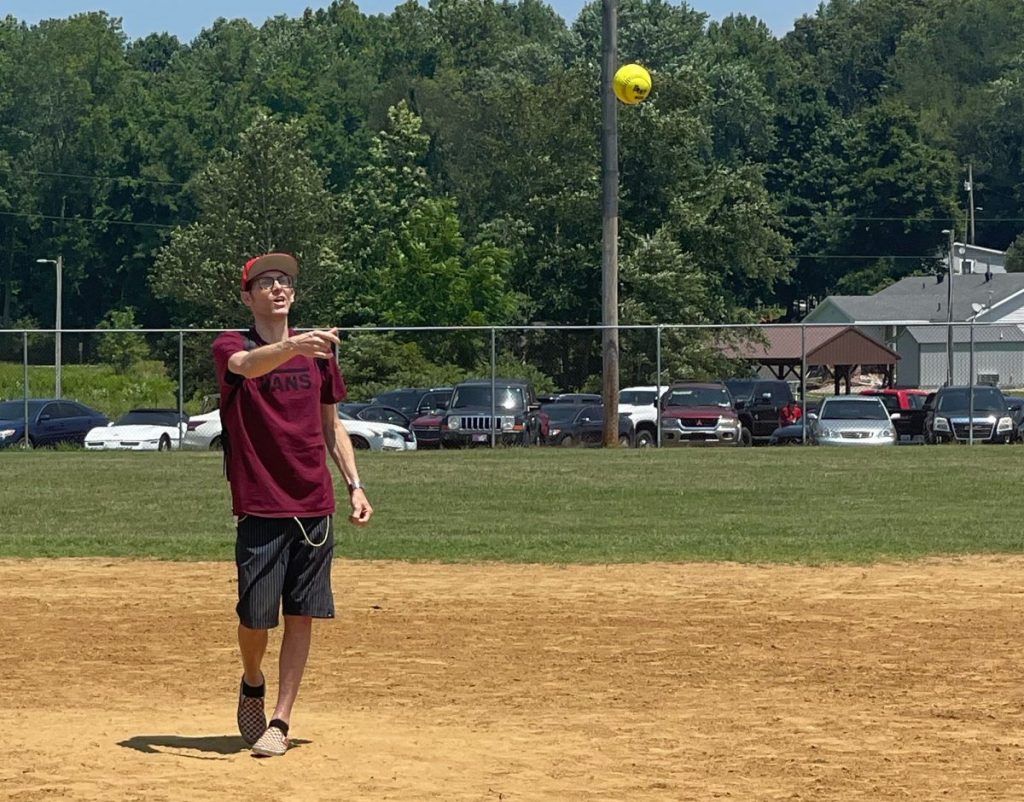 Clarion News Editor Dave Taylor throws out the first pitch at a benefit co-ed softball tournament held Saturday at South Hancock Park. Seven teams played in the tournament. More than $6,000 was raised with entry fees and the silent auction. Taylor was a spectator for much of the tournament.

Chelsea Boling organized the fundraiser for Dave Taylor, and it was held at South Hancock Park on Saturday, July 23. The event lasted from 9:00 a.m. until around 9:00 p.m.
Dave threw the ceremonial first pitch at one of the softball games for the co-ed softball tournament.
“He was there for a lot of the day,” Chelsea said. “He had a good day and, despite the heat, he was able to be there for a little while, went home to cool off, and then came back when the sun was going down and it was getting cooler. He was there until the championship game, and got to watch a lot of it.”
There were seven teams who played, same as last year, Chelsea said. Each team had 10 players. There was a high school team, some church teams, including Boling Chapel, and a 4 J’s Supply team.
The 4 J’s team won the championship game, which lasted until a little past 9:00 p.m.
There was a $100 entry fee for the tournament, and some people donated over that amount. That money made up a large portion of what was donated to Dave, Chelsea said.
Several people in the County volunteered as umpires.
It wasn’t as big of a turnout as last year’s fundraiser for Dave, she said. The reason for that mainly had to do with the heat this time; Saturday was a very hot day.
Justin & Shanna Nugent worked the entire day at the concession stand, as well as Shanna’s sister and her husband, Jennifer & Joe Boarman. Joe did most of the cooking and grilling. Joe’s mother, Cindy, also helped.
They offered hot dogs, burgers, chips, candy, and drinks. Shanna’s nephew, Jaxson Boarman, helped out, as well as Dave’s wife’s son, Jackson.

John Michael Morris donated delicious pulled pork sandwiches.
All of the food and effort was entirely donated. There were prices listed for the food, Chelsea said, and many people donated more than the amount listed, because they knew it was going toward a good cause.
Justin Nugent’s parents, Billy Joe & Carolyn Nugent, worked all day manning the raffle tables.
Chelsea and her mom, Wanita Lawson, worked at the silent auction together.
“This community makes it easy to organize an event like this,” Chelsea said. “We all come together. I had put the word out that I needed some silent auction donations, and they all came rolling in.
I had nearly 50 items in the silent auction, and they were very nice items, ranging from local gift cards, hand-made items, and nice gift baskets.
Pam Bolin-Lee donated a ticket for the trip to Christmas in New York with her business – Pam’s Traveling Friends, and that raised $750 by itself.”
Chelsea also played on the Boling Chapel softball team, and they won third place. “I had to go back and forth from the games (to the silent auction), because I was playing in the tournament,” she said.
Even with the heat, all had a great day and everyone enjoyed the softball tournament. “We loved playing,” she said. “The softball tournament is unique, because we have a wheel that we spin, and each lot has a rule written on it, and that rule applies for that inning.”
Sometimes they’d have to start with two outs, for example. There was even a rule on the wheel that you have to run the bases backwards! “All of that is always super entertaining,” she said. “We just wanted it to be fun.”