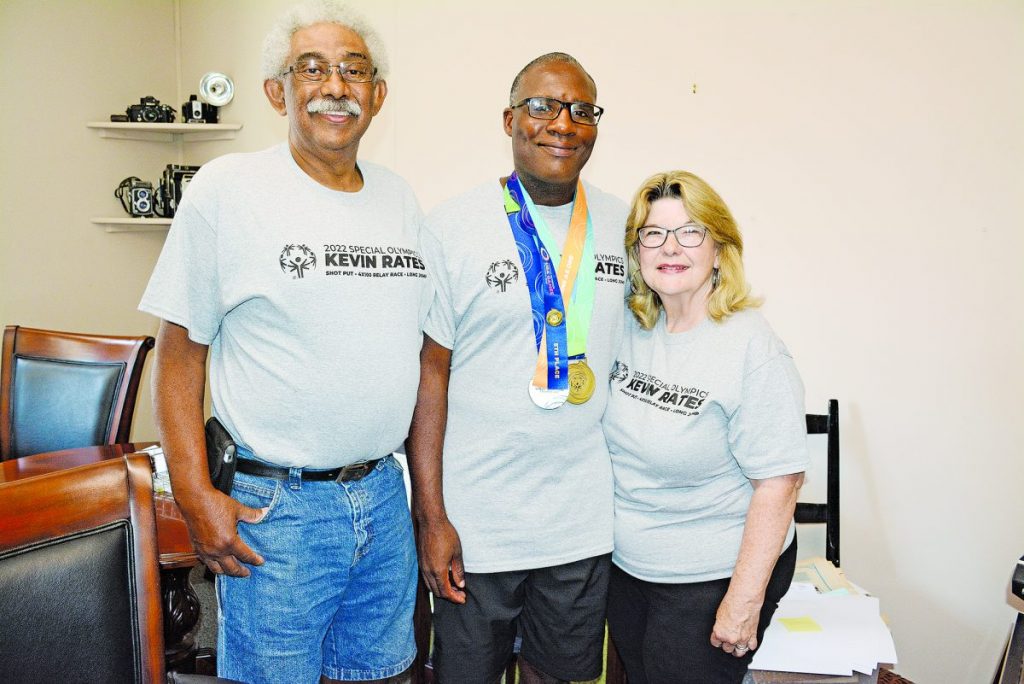 Kevin Rates, a gold and silver medal-winning Special Olympian from Hancock County, shows off his medals with parents Leon and Peggy Rates. Kevin has competed in Special Olympics events for 30 years.

Kevin Rates, of Hawesville, brought home a Gold Medal for Team Kentucky in the 4×100-meter relay race, at the 2022 Special Olympics USA Games, June 5-12, in Orlando, Florida.
He, impressively, earned a Silver Medal as well, in shot put.
Hancock County welcomed him home on Sunday, with a fire truck parade in downtown Hawesville. Many citizens, along with Kevin’s family and friends were there to honor him.
His 4×100-meter relay team, consisted of: Michaela Hickerson, Caitlin Roy, Kevin Rates, and Trevor Yates.
Kevin was the third runner in the relay, who pushed their team ahead, and handed off to Yates for their big Gold Medal Win.
Northern Kentucky Tribune reported: “Team Kentucky used a scorching third leg from Rates to take command, and cruised to the win …”
The advantage that Kevin gave his team with his speed and coordination, brought Team Kentucky seconds ahead of Team Idaho in the relay race, and secured their win.
Kevin is 38-years-old, and a 2003 graduate of Hancock County High School. He works at Bills IGA, in Hawesville. 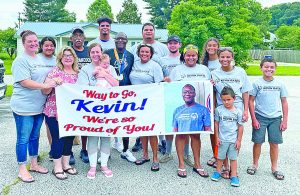 Members of the Rates family turned out in Hawesville to welcome their favorite athlete back home after the long trip to Orlando, Fla.

He has been a Special Olympics athlete for 30 years, and has competed in track and field for over ten years now.
He has also competed in bowling, softball and basketball with the Daviess County Special Olympics program. This was his first trip to the USA Games.
Kevin explains how he was asked to compete with Team Kentucky at the USA Games this year: “With my Sunday School class, at Owensboro Christian Church. My Sunday school teachers, Kim & Jeff Johnson, they are my track coaches and my Sunday school teachers.
We were having Sunday school class, and they pulled me aside, and wanted to talk to me outside of the classroom. They asked if I would be interested in going to Orlando, Florida, for the USA Games, and I said, ‘Yes.’
So, they contacted the people in Florida, and they mailed me all of the information.”
Peggy Rates, Kevin’s mother, said, “They contacted the people in Frankfort, they also asked us, and double-checked to make sure that was o.k. with us.”
Kevin and his teammates flew to Florida on June 4. They all stayed in a hotel while there. “It was all different team players of the different sports, that were there. There was track and field, gymnastics, flag football, bowling, basketball, softball, and swimming,” he said.
Kevin talks about his experience with running track, up to this point: “I’ve done the 100-meter dash, and 50-meter dash, and others, years ago, but, I have never done a relay race. It was the first time ever I’ve done a relay race.”
His father, Leon Rates, said, “He didn’t get to practice first. They practiced when they got to Orlando.”
Kevin said, “I was very excited and very nervous, when we won the gold medal. When they did the medals for the relay, we had all 7 teams on one podium.
They put First Place team, Second Place team, etc…and each team that was in the relay got a medal, and every place they got, the team that was on that relay stood in that lane of medals they got. We were number one.”
When asked how he feels about being in the First Place team, and winning the Gold Medal, Kevin said, “Great.”
He, along with the other members of Team Kentucky, had a day off to enjoy Disney World’s Animal Kingdom, and Magic Kingdom, which was provided to every athlete at the Games, as a perk. Peggy said that he “really enjoyed it, while they were down there.”

All 58 athletes on Team Kentucky flew home together on one flight, and landed at Muhammad Ali Airport, in Louisville around 11 in the morning, on Sunday, June 12.
Leon and Peggy picked Kevin up, and drove straight to downtown Hawesville, where a large reception was awaiting them, to honor Kevin and celebrate his victories of winning the Gold and Silver Medals.
When they were driving over the bridge from Tell City into Hawesville, Peggy said that they could already see the lights from the fire trucks.
“We were coming back from Louisville, and Chelsea Boling and Tina Aldridge Snyder kind of coordinated everything. I think there were some that were making posters. They wanted it to be a surprise. We wanted to thank them again. They did a lot,” Leon said.
When they arrived in downtown Hawesville, Leon and Peggy woke Kevin up from his well-deserved nap after his extremely busy days in Florida, and the early flight.
Peggy said that Kevin, and all of the Kentucky Team had to get up at 4 a.m. in order to make their flight home.
Hawesville Fire Department had all of their fire trucks out for the parade. “It really surprised Kevin, because he had to get up so early, that on the way home he had fallen asleep, and so Leon said, ‘Kevin, you need to wake up.’
Well, he woke up to all the fire engines, and the lights going, and Leon said, ‘Surprise!!!’
He didn’t know. We didn’t tell him what was going to happen. So, it was totally a surprise.
We came across the bridge, and we could see the lights going and everything. So, that was really nice. It was real sweet for everybody to do that,” Peggy said.
Most of Kevin’s siblings were there at the Reception to help welcome him home and congratulate him, along with many friends in Hancock County.
“It was just the fact that our small community came together in honoring Kevin,” Peggy said, “That was just overwhelming. It was very appreciated. I think that’s the benefit of living in a small community, such as ours.
I just feel like we’re blessed to be living in a community where they honored Kevin. They didn’t have to do that, but they wanted to.
I want to thank everybody who came, and thank anybody that had anything to do with this.”
Leon and Peggy had given a list of organizations, individuals, and businesses, who they thought might donate toward Kevin’s trip, to his teachers/coaches at Owensboro Christian Church, as they had requested.
“We appreciate all of those who donated. We don’t know who donated. We don’t even have a list of who gave. But, we know people did give from here. And, we know businesses gave.
Whoever did, they know it, and we really appreciate it…There are a lot of people in the County that donated, and we want to thank them for that, especially.
Because, in order for him to go, he had to come up with around $2,500. They told us not to worry about it, and just to make a list of people that might donate. So, we did,” Peggy said.
Leon said that there were “a lot of donations made, and whatever was left, the Owensboro Civitan Club made up.”
About arriving at the reception parade for Kevin, Leon said: “It wasn’t surprising, because we know the closeness of the people here. It seems like if anyone has a need or it’s time to rejoice in something, people from Hancock County pull together.”
When asked if he will be entering anymore races, Kevin said, “I’m thinking about running the 100-meter dash.”
He was asked to come back to the Special Olympics USA Games in 4 years.
“I can practice for that, if I decide to run it,” he said, “at the high school.
And then my sister, Christy, she is Assistant Athletic Director at Apollo High School, and she coaches all of the sprinters in Apollo’s Track Team. She can work with me.
I might try to see if I can go to Apollo’s and HCHS’s tracks and practice.”
Leon said that Kevin participates every year with his group in Owensboro, in the Daviess County Special Olympics programs.
Kentucky teams compete in the USA Games every 4 years, against teams from all over the country.
”There were around 4,000 athletes (who competed this year). They had an opening ceremony. A lot of celebrities were there,” Leon said.
Kevin said he enjoyed seeing The Harlem Globe Trotters, while there. “I went and watched them do tricks. I sat front row, and watched them play. A lot of football players were there as well.”
Leon & Peggy weren’t able to attend the Games with Kevin. Leon had knee replacement surgery recently. “Sitting for awhile in a car, or even walking around was going to hurt. I didn’t want to take any chances,” he said.
They are so very proud of Kevin, and so is all of Kentucky. Congratulations Kevin and Team Kentucky!