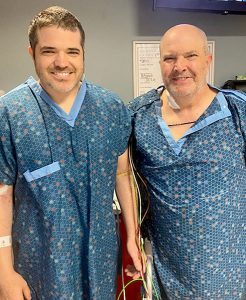 Todd and Chris Johnson are all smiles before undergoing lengthy surgeries May 17 at Vanderbilt Medical Transplant Center. Todd donated a lobe of his liver to his father, who had long suffered from hereditary cirrhosis. Both men are currently recovering in the Nashville area.

Chris Johnson of Hawesville is on the road to recovery following a liver lobe transplant at Vanderbilt Medical Center Transplant Center in Nashville on May 17.

“I am feeling well and experiencing the normal pain associated with such a surgery,” Chris said Monday from his intensive care room. He said he is currently progressing as expected, and is currently awaiting a step-down room to become available.

Patsy Johnson, Chris’ wife, said the expectation is that he will be released from hospital admission by the end of the week, though they will remain in Nashville for a total of six weeks for follow-up care.

“Chris is going to need to have labs and an ultrasound on a weekly basis to assure everything is going well,” Patsy said.

The couple will stay in an Airbnb in Nashville following his release from the hospital, and patient advocates will inspect the accommodations so that Chris is in a safe environment and avoids undue exertion in performing his daily routine.

Chris’ son, Todd Johnson, donated a lobe of his liver for transplant, an act Chris said, “Humbles me that someone would do that for me.”

“Things weren’t lining up as is typical in such transplants, so they used cadaver donor arteries and veins to complete the process,” Patsy said.

“We are so pleased with the care we have received at Vanderbilt. You never want to need these professionals, but if you are going to need them, we could not recommend them enough. They have been attentive to our needs, and even told Todd how proud they were of him that he would do this for his father.”

A liver lobe transplant from a living donor is possible because the liver will regenerate itself in the donor and the recipient. The ultrasounds Chris and Todd will receive over the next few weeks will check on the progress of regeneration in both men; the liver will typical regrow to full size in 8 to 12 weeks.

Chris said he will be required to take anti-rejection medications for the rest of his life, and has prepared to take the next 12 weeks off from his job in information technology at the Archdiocese of Owensboro. He will have medical checkups from here on out, but those appointments will stretch out over time until they are likely only needed annually.

Patsy said his recovery could take as long as year, though recovery times are different for each person as we are all unique physiologically.

“As I said before the surgery, I am looking forward to getting my health back,” Chris said. “I’m not sure how long it will be before I start noticing changes in the way I feel, but I am looking forward to no more visits to the emergency room for bleeds (from esophageal varices). There are precautions I will have to take from here on out due to a depressed immune system, such as paying closer attention to washing fruits and vegetables and being mindful of protecting myself from viruses and infections.”

Patsy said the medical team had Chris up and walking the day following the transplant surgery, and occupational/physical therapy is advising the two men on how to safely perform their daily activities and self-care.

Chris said he is thankful for the new lease on life, and that doctors told him to enjoy the rest of his life because “This liver is going to last.”

“To think that everything is going to start changing for me is an exciting thought,” Chris said. “We have a great support system, and once I am feeling a better, I don’t believe I can keep my family away even if I wanted to. We are so appreciative to everyone who has prayed for us, and those who continue to wish us well.”

Patsy said she is grateful that Chris “will be around for a long time” and will be able to enjoy a new quality of life. “I am very excited that he will be here for us, especially for the grandkids. I’m still a little worried, but relieved at the same time. It’s a bit of a miracle how this all came to be, and our gratitude is hard to put into words.”