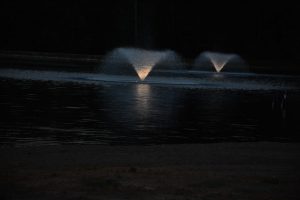 The aeration fountains at the lake at Vastwood Park are seen as they are lit up at night. The fountains were added last year to aid in fighting the growth of aquatic plants in the lake, as well as helping with water quality and fish population health. The parks department is currently preparing for the opening of the swimming area at the lake for the summer season.

Hancock County Parks is busy preparing for the opening of the summer season following a number of projects to improve the facilities, and will offer Hancock citizens more affordable opportunities for recreation close to home.

Judge/Executive Johnny “Chic” Roberts said improvements have been made at Vastwood beach, with “several tons” of sand brought in to improve the beach, as well as the successful addition of aeration fountains in the lake.

The fountains were added to help control the growth of aquatic plants in the lake, which not only helps to maintain water quality of the lake but also the health of fish populations.

While no definitive date for opening the swimming beach has been finalized, the county is currently seeking to fill a lifeguard position at the beach. Roberts said prior to the opening of the swimming area, the Hancock County Health Department will conduct water testing to assure the safety of the lake.

Roberts said last year’s opening of the swimming area was a great success, and this year the department will repeat the swimming days of Thursday through Sunday.

In addition to beach rehabilitation and the addition of the aeration fountains, other improvements at the park include updated fencing along with a funded project to replace playground equipment at the park. As well, paving has been rehabbed in some areas and added near the girls youth softball field.

Bleachers have been purchased for the high school girls softball field – in conjunction with Hancock County Schools – and assembly will take place this summer.

Another exciting project is the securing of a grant to help fund the addition of a splash pad at the park, though that project is still in the early proposal and design stages. It has been approved by magistrates of Hancock Fiscal Court.

“The park is looking really good right now,” Roberts said. “The crew has worked hard this spring to prepare for a busy season. We are so fortunate to have a facility such as this right here at home. Fiscal Court has been supportive of the ongoing ideas for improvement and enhancement.”

Other amenities at the 400-acre Vastwood Park include a disc gold course, open grassy spaces, a camping area with water and electricity, a bath house, a beach house available for rentals, covered picnic shelters, tennis courts, basketball courts, and a walking trail.