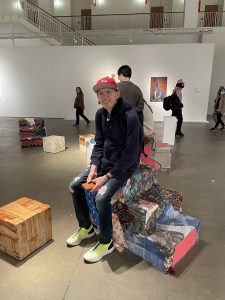 Things have been going very well lately and I’ve sort of forgotten that just two months ago I was told to go on Hospice. I’m getting used to things going well but I wonder if I’m setting myself up for a big, devastating disappointment.

I’m scheduled to have another CT scan on May 4, which will say whether my newest chemo treatments are still working.

My last scan showed that the cancer was getting less dense, which meant it was dying.

The scary thing is that on my previous two types of chemo they both began by killing the cancer before they stopped working. This one can’t stop working because I’m out of things to try.

My hair, which had been falling out at such a pace that I finally had to shave my head, has stopped falling out. Normally that’s a positive thing, but does that mean the chemo has stopped working too?

I still feel pretty good, all things considered, but I have been spitting up more lately, which is one of the symptoms of my lungs going bad again.

Am I about to get hit with very bad news? Should I ignore this feeling until it smacks me on May 5 when I get the results? Or should I start bracing myself for the worst?

It’s an odd place to be, trying to remain hopeful while acknowledging the threat of death looming up ahead.

I understand that death technically looms for everyone, but not everyone has had a doctor tell them they might have a month to live.

I’ve kept on making plans for trips and things to buy and things we need to have done on the house. Just yesterday my new wife Jamie and I were talking about what city we wanted to visit next. We landed on Nashville, mostly because it’s such a short drive from the house in Hawesville.

I want to experience this big, crazy world with my wife at my side, and I can’t do that if I’m dead.

Just writing this I remembered that I never finished my funeral plans, where I was supposed to choose which photos I wanted displayed and which songs I wanted played. I stopped because it stopped feeling urgent. I hope that wasn’t a mistake.

As is often the case in this column, I find that I can sort of talk myself down from the ledge part of the way through, and I think I’m doing the same here.

Regardless of whether I’m living or dying, I know that God is bigger than my problems and I’m not going through this alone. I not only have God but I have the support of an amazing community and family, as well as my afore-mentioned new wife.

Maybe I’ll see Nashville and Los Angeles and get a new deck on the house and drive my Bug with the top down. Maybe I’ll get sick in a matter of weeks and that’ll be it. Either way I’ve been blessed beyond measure and it’ll be OK.

I will forever be grateful for the blessing of getting to say goodbye, of getting to make a bucket list and actually check things off of it, and of getting to live long enough to marry the love of my life.

If I go soon, this is just about the best way to go out.
dave.hancockclarion@gmail.com