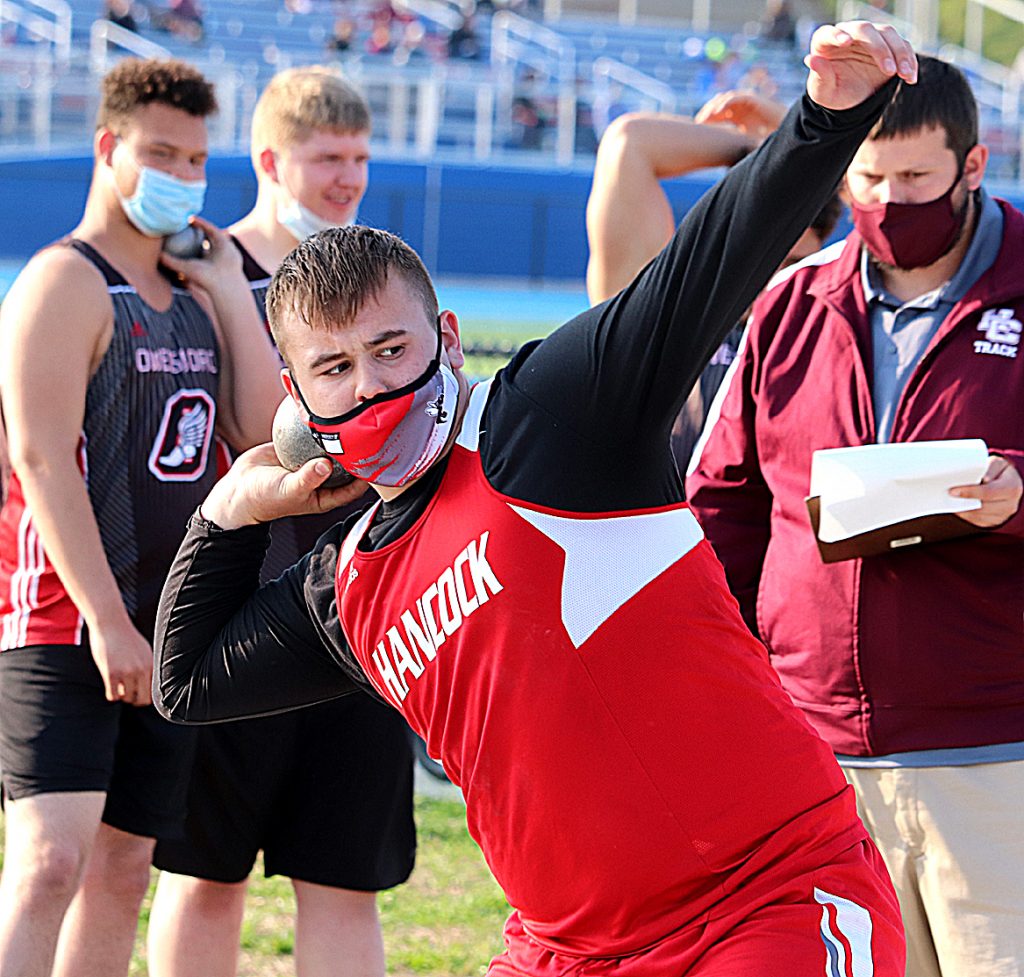 “It was a cold day and very windy day. The conditions were not good for anyone. I am very proud of our athletes for toughing out this meet,” HCHS coach Chris Hawkins said.

“Aly ran a very smart race taking control on the third lap and never letting up. It was one of her best races,” the coach said.

Jayda Meserve placed eighth in the girls 300 meter dash in a time of 53.93, while Abi Decker was 24th in one minute. Isabel Grimes of Breckinridge County won in 45.43.

The HCHS girls placed sixth in the 800 sprint medley in 2:17. Runners were Tessa Walls, Hannah Jackson, Lexus Ralph and Decker.

Hancock County was seventh in the distance medley in  17:42. Runners were Voyles, Decker, Ralph and Nevitt.

“Luke was able to get a good throw into the wind to win the discus,” Hawkins said.

HCHS was fifth in the 800 sprint medley in 1:53. Runners were Braydon Wathan, Alex Basham, Hayden Shearn and Ben Baker.

Baker placed 10th in the high jump with a height of five feet. Carter Robinson of Central Hardin won at 5–10.

HCHS was 10th in the distance medley in 14:25. Runners were Noah Henson, Nolan DeJarnette, Griffin DeJarnette and Stephens.

HCHS was seventh in the 4×400 Co-Ed relay in 4:56. Runners were Nolan DeJarnette, Aly Voyles, Baker and Ralph.

“The middle school athletes who competed did extremely well against high school competition. I am very proud of them,” the coach said.

The track teams competed in a 12-team Colonel Classic at Henderson County Saturday.

Lexus Ralph placed seventh in the girls 400 meter dash in a time of 1:12. Hayden Tichenor of Henderson won in 1:04.

Central Hardin won the boys title with 107 points. Hancock was seventh with 44 points.

Luke Pritchard placed fifth in the shot put with a throw of 38–08, and Alex Basham was 10th at 34–05. Sam Cotthoff of University Heights won at 42 feet.