A Hawesville man has been charged with several offenses after an investigation determined he allegedly assaulted a 15-year-old juvenile after entering a residence belonging to his girlfriend following a vehicle crash on nearby property. 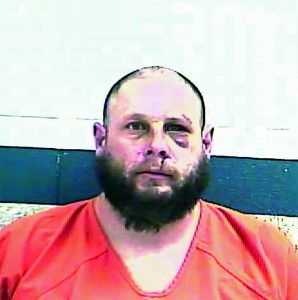 According to a criminal complaint filed by Hancock County Sheriff’s Department Deputy Chris DeJarnette on Feb. 16, the incident began on Feb. 13, when Cody Lee Wedding, 39, crashed his vehicle on a neighboring property to his girlfriend’s residence. The complaint and arrest citation do not specify a location for the incident.

Following the crash, Wedding is alleged to have walked to his girlfriend’s residence, where he began screaming and beating on the entry door of the home. Two juveniles were home at the time and allowed Wedding inside, stating they were scared he was going to break down the door.

He returned to the scene of the accident and a neighbor pulled out a mobile phone and indicated he was calling authorities, at which point Wedding took the phone and broke it into two pieces. At this point Wedding returned to the home. Once inside Wedding is alleged to have begun shaking the refrigerator, throwing items that were inside in an attempt to locate alcohol. The juveniles asked Wedding to leave the residence, at which point he began “yelling, cursing and chasing the juveniles,” according to the complaint.

Wedding grabbed a 15-year-old juvenile and assaulted the child. The 15-year-old fought back, causing significant injuries to Wedding’s face. Wedding’s girlfriend then arrived at the scene, and Wedding chased her and the juveniles from the home.

The woman and children then got into a truck owned by a neighbor. Wedding then came from behind the home with a shovel and threatened bodily harm to the two neighbors, chasing them with the improvised weapon.  At which point Wedding is alleged to have begun beating on the vehicle in an attempt to enter it. Wedding busted out the driver’s side window of the truck and bent the doors, causing damage to the vehicle.

Other neighbors arrived and tried to reason with Wedding. They had to wrestle him to the ground. When Deputy Jeff Hendrick arrived at the scene, Wedding was observed assaulting the two neighbors who had intervened. As Hendrick attempted to handcuff Wedding, the man “kept rolling away and struggling” with the deputy, according to the complaint.

DeJarnette wrote that Wedding was “bloodied as his result of fighting with the juvenile and blood got all over the officer and his cruiser.”

Damage to each of the vehicles was estimated to be in excess of $1,000 each.

Wedding was arrested on Feb. 16 on a complaint warrant signed by Judge John McCarty and lodged in the Breckinridge County Detention Center on a $7,500 cash bond.

Wedding was arraigned Wednesday in District Court by video teleconference.

The Clarion is not identifying the victims in the incident due to juveniles being involved and the domestic violence nature of events.

The wife of one of the adult victims in the incident contacted the Clarion to express gratitude to the Sheriff’s Department for its response in the matter, while also expressing concern for staffing levels in the department following the “dangerous situation.”

“Our Sheriff’s Department is understaffed and over worked. The staff should be at least doubled and preferably tripled. Having one deputy per shift is dangerous to the deputies and to the public. One deputy cannot be expected to cover the whole county. We know they do all they can to protect the citizens; perhaps it is time for the citizens to request an increase in the budget for the Sheriff’s Department so that more deputies can be hired.”