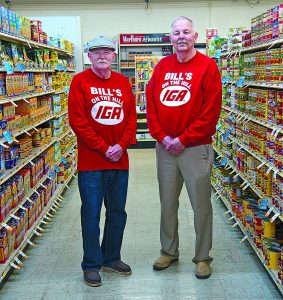 Billy Jr. and Wayne Stephens have agreed to terms for the sale of Bill’s IGA to Mafaz Ansar of Glasgow. The business was started in 1978 by the brothers’ parents, Bill Sr. and Elizabeth Stephens. The Stephenses said they have been asked by Ansar to continue at the store for the foreseeable future.

Bill’s IGA – “Bill’s on the Hill” – will soon change ownership after owners Billy Jr. and Wayne Stephens agreed to terms with Mafaz Ansar, a diversified businessman from Glasgow.

“Now was just the right time,” Wayne said. “It’s been 44 years in our family; I will be 73 this year and Billy will be 76, and we want to travel and spend time with our children and grandchildren. We’ve sacrificed a lot of time away from our families to grow this business, which is ironic in that it is a family business.”

Billy said Monday there have been numerous missed ballgames, family events and vacations through the years to keep the full-service grocery running smoothly.

“To be honest, we’re tired and ready to enjoy taking it a little easier,” Billy said. “Mafaz came to us with the right offer, and his ideas for the future of Bill’s IGA was exactly what we wanted. Mafaz will keep the name, the employees and will run the store with our local people.”

Ansar, 40, is a native of Sri Lanka, an island nation off the coast of India, and came to North America by way of Vancouver in 2002 for education. He later moved to Glasgow in 2004 to continue his studies in information technology at Western Kentucky University.

“The plan is to keep the store just as it is, with the same employees and same level of service to serve the community,” Ansar said. “I value good managers and good employees, those who can run things, which gives me time to pursue other things and grow in new areas.”

Wayne said Ansar will retain Steven Robertson as manager and Barbara Wheatley as day manager. The Stephenses are currently talking with a local person “well-known to everyone” to take on weekend manager duties.

And despite the impending sale, another round of growth is taking place at the store, with the construction of a package liquor store near the front entrance.

“When we told Mafaz we were adding a liquor store, he was very excited about that,” Wayne said. “We’ve lost money, we had two years in a row where we lost money and could have gotten out then, but we stuck with it. The sale of alcohol in Hawesville really changed things for us practically overnight; sales jumped 15 to 20 percent right away.” 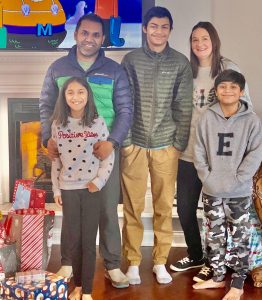 Mafa Ansar immigrated to Vancouver in 2002 from Sri Lanka, and moved to Glasgow in Barren County in 2004 while studying at Western Kentucky University. He opened his first business in 2009, and is heavily involved in civic activities in Barren and Hart counties.

“When I came to the United States, I was looking for work opportunities, not to get into business,” he said. “I met my wife in Glasgow in 2005, and worked hard. I saw a closed convenience store in 2009, it had changed owners three times in a year. The bank would not loan me the money, but the owner said, ‘I think you can do it if you work hard,’ and he owner-financed and I paid rent. I cleaned it up, bought some groceries and went to work.”

After some time, Ansar was approached by an interested buyer and sold the store for a profit. He soon purchased another store which had been closed for six years.

“That’s when I started making good money,” Ansar said. “I have been fortunate to have the support of my customers in Barren, Hart and Hardin counties. (Bill’s IGA) gives me an opportunity to keep growing in a new area.”

Other current businesses for Ansar include Zack’s Express convenience store in Glasgow and a hotel in Horse Cave.

His family in Sri Lanka has a strong connection to the tea industry, which also helped make English businessman Thomas Lipton a household name.

“I turned 40 last year, so I have now lived in North America and the United States longer than I was in Sri Lanka,” Ansar said. “Kentucky is my home; I feel like this is where I grew up. It’s where I learned to make money, learned to work, and learned how to be in business.”

In his spare time, Ansar enjoys spending time with his wife, two sons, and a daughter. He said he enjoys watching college basketball, as well as supporting his oldest son in his basketball interests.

Stephenses proud of the legacy ‘on the hill’

“When we started, there were only three of us – me, Dad and Mom,” Billy said. “The next year, we convinced Wayne to come down on the weekends to help, and it was like I was suddenly on a vacation. He really made a difference. I was teaching school in Daviess County during the day, and working here at night.”

At the one-year anniversary of the opening of Bill’s Quick Service, the store had seven employees.

“We really worked hard in those early years,” Wayne said. “We were focused on good service, supporting the community and improving when we could.”

Over the years the store was expanded three times and there has been one remodel. Services such as a hot deli, expanded produce and community event sponsorship followed. The store became affiliated with IGA in 1980. Ansar will continue that affiliation.

Among the community events the store is involved with is the annual VFW Veterans Day observance. The business has long sponsored the veteran meal at the gathering. Billy (U.S. Army – Viet Nam) and Wayne (U.S. Marine Corps – Viet Nam) are both proud members of the VFW.

As well, with 29 current employees (it has been as high as 40), the brothers are thankful for the loyalty customers and employees have shared with the family.

“We’ve employed generations of families, and we have proudly provided an opportunity for intellectually disabled employees to make a living,” Billy said. “We always hand out suckers to the kids coming through the store; we’re giving out suckers to the third generation of Hancock families. It’s been a long time right here.”

As well, the brothers say a grocery store can be a center of community life and they are always ready to be involved.

“People will come in needing help, we help when we can,” Billy said. “Sometimes you will see family reunions in the aisles, you see your friends you’ve had all your life. We are proud the store has kept going in a time when small, independent groceries are closing and many towns are left without a place to shop.”

Wayne said he is confident Ansar will be an asset for Hancock County.

“Mafaz is young and ready to go,” Wayne said. “It’s going to be a plus for the store and the community. Mafaz has the financial resources to make upgrades and improvements. That can only be a good thing. The same people you are used to seeing are going to continue to be here to serve Hancock County.”

Billy and Wayne said Ansar has expressed an interest in keeping their services, so do not be surprised to see the brothers still hanging around the grocery aisles.

Ansar active in his communities

“I enjoy knowing people and doing what I can to promote my communities,” Ansar said. “I love Kentucky communities, and there is nowhere I would rather be.”

He is currently on the Board of Director for Hart County Tourism, and is president of the Glasgow Lions Club. He has also been active with Barren County Chamber of Commerce pursuits.

And his advice to young people considering a future in business?

“Don’t give up,” Ansar said. “It’s going to be tough. Every time I buy a new business, I get nervous. You have got to get past that period. You have to take the risk, get out of your comfort zone, and be patient.”