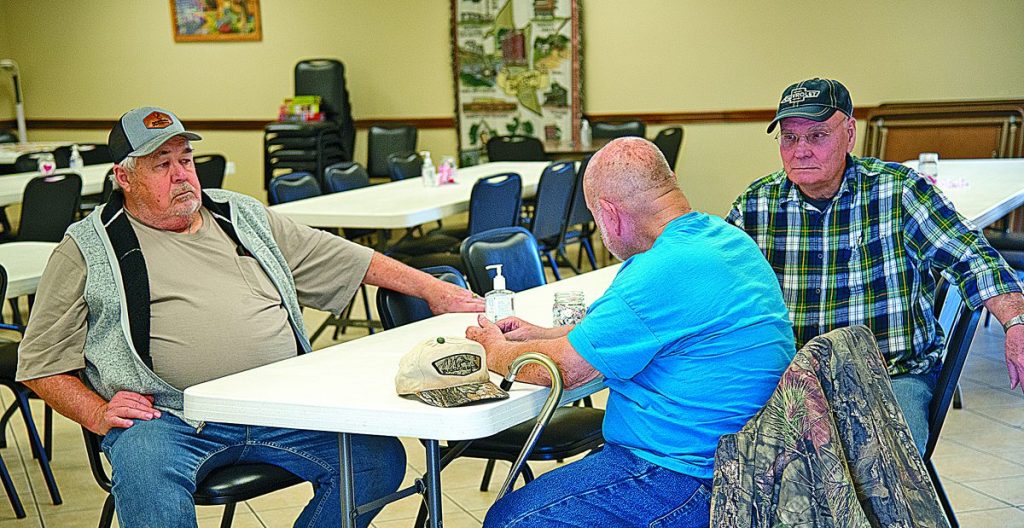 John Wheatley, Henry Hall and Richard Warner, Sr., socialize Tuesday at the Hancock County Senior Services Center in Hawesville. Wheatley is not only a member at the center, but also a driver for the center’s transportation services.

The COVID-19 pandemic changed just about everything for the Hancock County Senior Services Center, but with the loosening of pandemic restrictions and safeguards, business is nearly back to normal for staff and members.

“During the pandemic, we closed the doors and took the meal program to delivery-only,” said Director Lona Morton. “I had concerns for our members, and how they would maintain their sense of community and the social interaction they enjoy so much.”

But while there may have not been activities going on inside the building on Ridgewood Drive in Hawesville, the feeding program – the primary mission of the center – ballooned in size after inclusion in the program became based upon only being over age 60.

When the center closed in March 2020, about 500 meals were served per month within the nutrition program; that figure grew to more than 1,200 by September. Morton said Tuesday meal figures have returned to near pre-pandemic levels; now the mission is to let the senior population of Hancock County know the center is operating again, and is ready to welcome them in.

The center in Hawesville operates Monday through Friday, while the Lewisport center is open Tuesday and Thursday.

Services and activities offered include a well-equipped exercise room, a newly-renovated lounge with pool tables, and a community room where members can play games, work puzzles and enjoy a few hands of cards.

Jean Keown, 92, has been a member at the center since 1988 and said she enjoys the friendships she has built from her time there. But she also really enjoys the food.

“It’s mostly because I don’t have to cook,” said Keown, who was born and raised in Hawesville. “I have made a lot of good friends down here, and I’m here every day they’re open. I also use the bus to get around when I need to.”

Seniors are offered transportation services through the center at $1.50 a trip in Hancock County. Out-of-town rates are also offered for those needing to make a doctor’s appointment in the region. Before the closure, center staff also planned day trips to larger cities, such as visits to Louisville, Bardstown and French Lick. The center was able to obtain their own bus through the help of the Owensboro Health Foundation and Hancock County Fiscal Court.

“For a time, we were partnering with GRITS, but it made more sense to have our own vehicle and free up some of that funding for other parts of the program,” Morton said.

Funding for operations is a combination of Title III federal dollars, along with state and local support. While the center is county-owned, it also operates in conjunction with the Green River Area Development District.

Richard Warner, Sr., of Lewisport began coming to the center after it reopened in November, following the passing of his wife. Warner said he began showing up at the suggestion of his daughter.

“She didn’t think it was good for me to be sitting at home all of the time,” he said. “Everything I do down here, I can do at home, but at home, there are no people. The social contact and friendships have become very important to me.”

Patsy Young became a member at the center in 2000, encouraged to check out what was happening by her husband, Herbert. Herbert visited the center daily to play pool with a brother and friends.

“After I retired, I wasn’t interested right away,” Young said. “I didn’t think I was old enough to need such a thing. I love coming in and visiting with people; it’s nice to be involved with something.”

Morton said she is always looking to get the word out about the benefits of the center to the county’s seniors, but often hears from people that it is not for them.

“With medical advancements, people are living longer and living healthier,” she said. “Many of the people who are eligible on the younger end, many of them are still working, but there are those who resist it because they don’t feel old enough to be in here. That’s fine, but we just want them to know the resources are here.”

Other activities at the center deal with assuring members have the latest information at open enrollment time for Medicare Part D, assisting them with navigating services available within state and federal government, as well as occasionally assisting members with personal matters, such as settling a phone bill.

“We just try to make everyone feel welcomed and at home,” Morton said. “I felt a draw years ago to work with older people. I have learned as much from them as the benefits we have provided them. It is a very warm and rewarding place to be.”