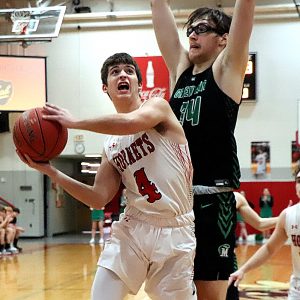 Evan Ferry broke the school record for assists in a game and the Hornets defeated Apollo 70-33 at HCHS Tuesday.
“It started with our defensive intensity early in the game and we hit some buckets,” HCHS coach Mike Orr said. “I was proud of the way we shared the ball. We needed a win like this.”

Hancock County (8-12) began to assert its dominance early on when the Hornets took a 14-8 first quarter lead. Ryan Ogle and Kaleb Keown led the way with two baskets each. Devyn Powers knocked down two 3’s in the second period and the home team’s lead grew to eight points (25-17) by halftime.

The third quarter was a thing of beauty for the Hornets as they dished and swished their way to a 30-5 advantage over an eight minute span. Keown buried two 3’s and Ogle was scoring at will while nearly every assist was handed out by Ferry. The junior point guard broke the record early in the fourth quarter when he passed to Ogle for an inside basket. The Hornet bench and the HCHS student section erupted when the ball went through the hoop.
Ferry’s 16th assist broke the record of 15 that was set by Coy Ogle in 1983. Ferry smiled as he walked to the bench to give way to his younger teammates.
Hancock County won the final frame 15-11.

“We did some inside-out stuff, which is something we’ve been teaching and preaching for years. We were able to play a lot of kids and we haven’t had many opportunities to do that with the schedule we’ve played,” Orr said.
Ferry had eight points, two rebounds and five steals to go along with his 16 dimes. Ogle had 24 points, seven boards and two assists, Keown had a double-double with 16 points and 16 rebounds, Powers had 14 points, four boards and three assists, Landyn Emmick had four points and four boards, Camden Lucas had four boards, Luke Brown and Dylan Morris had two points each, Jordan Payne and Caleb Payne had one board each and Alex Madden had one assist.

Meade County
Meade County earned the #1 seed for the upcoming 11th District tournament with a 51-42 win over the Hornets at HCHS Monday.
Trent Knoop and Grant Beavin dropped first quarter 3’s for the Greenwave as the visitors grabbed a 14-8 lead. Ryan Ogle, Devyn Powers and Kaleb Keown all scored for Hancock County.
Powers lit it up offensively for the Hornets during the second frame. The junior splashed a “3” and scored seven points in the period and Hancock County won the quarter 13-12.

Leading 26-21 at intermission, Meade got two more 3’s from Beavin and the Greenwave pushed their lead to 38-29. Powers hit another long range bomb for HCHS.  Even Ferry took control offensively for the Hornets down the stretch, scoring three baskets and going 2 for 2 at the foul line. Ogle hit one from beyond the arc, but the Greenwave sealed the win by sinking 11 shots from the charity stripe.

“We played pretty well defensively, but they absolutely killed us on the boards,” HCHS coach Mike Orr said
Hancock County shot 39% from the field. They were 3 of 11 from 3-point range and 11 of 14 from the stripe.