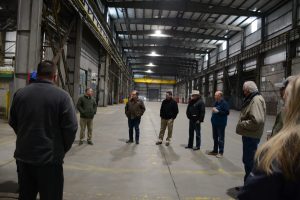 Gulfstream Commercial Services is moving forward in its use of the former Alcoa Corporation facility near Hawesville, a 305,000-square-foot facility which has been closed since 2005.

Ed Ray, chief operating officer for Gulfstream, said shortly after the company was approved in early 2020 for $2 million in state incentives on a proposed $25-million project to expand Envision Modular at the site, the project’s largest sector took a major hit due to the COVID-19 pandemic.

“Envision Modular is a manufacturer of modular components for use in the hotel industry,” Ray said. “With the pandemic, hotels went from 65 percent occupancy – to break even – to about 10 to 15 percent occupancy. Some of that has come back, but not all.”

Ray said many hoteliers were left with construction projects uncompleted as financiers and bankers began pulling funding as “high risk” in the challenged industry.

“Hotels are a big money drain of about two years, from planning to opening, with traditional construction,” Ray said. “With our modular methods, which are very popular in Europe, each room is constructed inside a steel module which is then shipped to the site and erected much like LEGO.”

Ray said this type of construction for hotels and apartments decreased the conception-to-completion time on a project to about seven months. He said overall the hotel industry has likely been set back 10 years due to the pandemic, though the company does have five hotel projects “in the pipeline.”

While Gulfstream is still focused on the project, the facility it purchased has found new life.

Ray said the company undertook an ambitious overhaul of the building after realizing the building “had good bones.”

The entirety of the interior was power-washed and has had a complete overhaul of electrical and plumbing utilities. The building was constructed in 1969, and has 1,800 feet of frontage on the Ohio River, along with CSX rail access and four interior spurs. Six bridge cranes inside the sprawling facility have been refurbished, as well.

“There have been several inquiries about not only what we can do at the facility, but we are providing warehousing space for a number of adjacent industries,” Ray said. “It is much more efficient for them to warehouse here rather than having warehouses spread out across the region.”

The COO said several trucks are in and out of the facility on a daily basis.

Ray said it would cost about $30 million to construct a facility which is comparable, so refurbishing provided tremendous savings while utilizing an existing structure.

“We are looking for long-term partnerships to occupy parts of the building,” Ray said. “I know there’s a lot of focus on creating jobs, though we feel it’s more important to fill the open jobs in a community. By forming partnerships with growing businesses, the local economy grows stronger.”

“Success of existing industry creates opportunities for what I term ‘shadow firms,’ those smaller businesses which serve the needs of large industries,” Baker said. “We have a great relationship with (Owensboro Community and Technical College) and the high school is successful in preparing young people to enter the work environment that is here.”

Hancock County has fared much better than most communities in Kentucky during the pandemic, as employment figures were not severely affected. The unemployment rate in the county for November was 2.8 percent.

Site can serve many needs

Ray said the company has fielded calls from trucking companies, small manufacturers, and even those interested in crypto currency mining.

“We are prepared to build-out to suit needs and work toward the needs of tenant businesses,” he said. “There’s access to power, gas, transportation by land, rail and water, so there’s a lot to be excited about. Companies we are working with are filling up the space and the interest in growing.”

There is still about 25,000 square feet of space available at the site, with several plots of available acreage for future building and expansion at River Rail.

For additional information, visit gulfstreamdev.com on the Web.