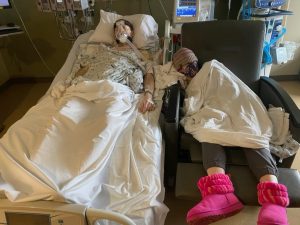 This is the most difficult column I’ve ever had to write. It’s not because of the content, it’s because I’m writing from an ICU hospital bed where I’m hooked to a million wires, feeling terrible.

I’ve been here since Thursday after I started having difficulty breathing and my blood pressure dropped. Shortly after arriving at the ER, we discovered I had pneumonia and a collapsed lung from a ruptured abscess. A chest tube was placed to drain the extraordinary amount of fluid which had accumulated and I was minutes away from being placed on a ventilator, but they decided to try me on a BIPAP instead.

That chest tube installation was a pretty horrifying event, where they take a full awake guy and just slowly stab into his side until they get what they want.

It’s now Tuesday and I’ve had a second chest tube in place for a few days. I guess they work together to administer medicine directly into my lung and drain the fluids from the abscess. I have so many tubes and wires coming off of me, I feel like an evil Marvel character or something from a modern day Frankenstein tale. But hey, people liked Frankenstein, right?

I haven’t had much time to contemplate this recent bout of near-deathness or any other topics of interests, mostly because I’m still very much sedated and moments of clarity are few and far between.

One item I’ve been able to reflect upon, is the ferocity of my sister’s love for me. After being admitted to the hospital, Jamie contacted my sister Georgia to let her know my status. Within about six hours, she’d been able to find someone to cover her shift as a pharmacist that day and made the three hour drive to Owensboro and she arrived so swiftly, we woke to find a nurse administering medicine and my sister sitting on my other side.

I’ve always been close to and loved my sister, even though she will say she thought I was going to be a heartless murderer when I was a child because she said I would hurt her without remorse and she will often regale Jamie with tales of my torments. That being said, these last few years have been difficult with many of life’s hardest experiences lining up to knock me down one after another. Throughout them all, my sister has been a ray of sunshine, support, and a first class gift giver.

She’s such a big gift giver, it’s gotten to the point we’ve nicknamed her “Georgia Claus” as every visit is a mini-Christmas. Looking past the physical gifts, my sister has gifted me so much more than a cool red couch or bathroom vanities I have yet to install.  She’s given me joy, hope, and the beauty of knowing someone has truly known me my entire life, seen me through everything, and still loves me unconditionally.

I certainly wish I hadn’t let people and things get in the way of spending more time with my sister over the last decade or so, but we’ve made up for that and then some this past year. It’s hard to put into words, but I suppose Jamie was able to articulate it best when we were beginning our courtship. We were talking about our families and she told me she had a younger brother who had passed away from cancer in 2016. She told me how she had been his healthcare guardian and was there through almost every appointment, procedure, and his eventual passing.

I told her I was sorry for her loss and that must have been hard. Without a pause she said, “There’s so few times in life you really get to show people how much you love them and truly be there for them. I cherished being there for my brother and having that opportunity, I have no regrets.” Speaking from being on the receiving end of that kind of love for a year now, I can say for certain my sister should have no such regrets, and I know without question I am loved beyond measure as her brother.