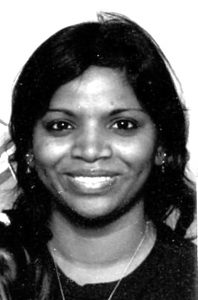 Nancy Muffett, formerly from Hancock County, and her husband, raising two little boys they had adopted from Korea. The social worker called and told them that there was a little girl in India named Hema, who needed a good home. They were really trying to find a home for her because she was such a good child. She was 12-years-old at the time, and it took two years before she was able to come to the United States and be with her new family.

Hema had been abandoned at age 5. She came home one day and her family had gone. All that was left was her blanket. She went next door, took her blanket, and asked them if she could work for them. She worked from age 5 to age 12 as a domestic servant; doing such chores as babysitting and washing clothes. She only made a small amount of money and some food to eat. In the 7 years that she worked as a servant, she had many tribulations. She went from one home to another, and was treated poorly at some of the places where she worked.

The Muffets checked into it and found a doctor who was willing to be the sponsor. He gave the money that was needed to get Hema to the U.S. “We were interested in giving her a good home. It took us two years to get her here. When she got here she was 14-years-old, and had never lived in a family of her own since she was 5; only with other people as a servant. She went to a Children’s Home in India at the age of 12. She hadn’t had any public education in India, but she spoke English very well when she arrived. We homeschooled until she was 18,” Nancy said.
While Hema was in Hancock County with her new family, she had her first snow; she had never even seen snow. “She was a very good cook. A very beautiful young lady. People would stare at her and tell her, ‘excuse me, you are just so beautiful.’ To have grown up in India where she didn’t feel like she had much value, she gained her value while she was here,” Nancy said.

“Hema and I went to a consignment shop looking for an Indian costume for another daughter who was going to be in a play and needed an American Indian outfit. The shop owner said they only had Asian Indian costumes, and that a doctor’s wife had donated two Saris. They didn’t have a market for Saris. So, she gave them to Hema. When she got home, she said when she was working at one of the houses in India, a begger lady came to the door and she would share her coins with her. The lady was in rags, and when she came to the door, Hema gave her the Sari that her master had given her. The beggar lady told her, ‘One day you will get two Saris for the one that you gave me.’ So, when she came to America, she went to the consignment shop and got two Saris for the one she had given the begger lady.”

Nancy said that Hema was a very deeply religious child. The children’s home where she had stayed was a Catholic Children’s Home in Bangalore, India.
While Hema was with the Muffets, she enjoyed cooking traditional Indian foods. She also enjoyed attending services with them, at Boling Chapel Methodist Church and Providence, in Daviess County.

Hema was only with the Muffets for 4 years. She got her GED, got a job, got married and moved away. She has 3 children now; a girl and two boys. All three kids are in private school. “Hema has worked very hard to take care of herself and her family. She’s really dedicated to her work,” Nancy said.

“On Dec 10th, the tornado blew the roof off of a house that Hema had just bought in November that she had been saving her money to buy. She was able to get the roof put back on her house. But then, on New Year’s Day, another tornado destroyed the house completely along with her business that she owned. She’s worked all her life to have what she has, and now she has absolutely nothing,” Nancy said.

“Please pray for Hema and her family. Hopefully, some of the money donated to the areas hit by the tornados has made its way to them and they are able to rebuild their home and business.”

Next is the letter Nancy wrote to her readers, when they were still in the process of trying to get their new daughter, Hema, home to them.

Nancy’s Notes
by: Nancy Marow Muffett
It is not easy waiting for a child whether one waits for the birth of a child or the time when an adopted child comes home.
For a year we have waited for Hema. She is in a children’s home in India. She will be fifteen in June. Her case has been in the courts of India since December.
India is one third the size of the United States, but has three times as many people. There are six hundred and eighty-five million inhabitants in India. Many children do not have the respect as in our country, especially those who are poor or orphaned.
When Hema was five years old, her father left her mother to take care of ten children alone. The mother worked as a vegetable vendor on the streets, but she could not support the family. Hema was hired out as a domestic servant. At a time when our children are just beginning school, this little girl was becoming a maid. She stayed in this position until she was eleven. At this time she was placed in a children’s home. Hema has been there since. She did not hear from her family again.
Now Hema has a new family. We are proud to say we are her family. We have pictures of the pretty Indian girl who calls us Mom and Daddy. She begs us to come to India to get her. She writes, “I can’t wait to come home.” She has sent us pictures and crafts she has made. She happily shows everyone her picture album of her family in the United States.
One judge has said that Hema is too old to make a good adjustment in the United States. We have hosted seven exchange students. We know how well children from other countries can adjust.
It is our hope that we can make one little girl’s dream come true. Perhaps you can help. If you, or a friend, or family member has come from India and has made the adjustment, write a letter, To whom it may concern, and describe briefly your experience. Send it to me at Cloverport. I will forward it to India. Perhaps a letter could make a difference.
If you can’t send a letter, maybe a prayer will help. Please say a prayer for Hema.