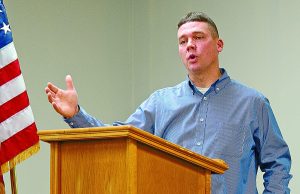 Judge/Executive Johnny “Chic” Roberts said the state of Hancock County is very promising and the financial standing puts the government in a good position to tackle vital needs in the future.

Roberts gave his “State of the County” comments at a breakfast meeting of the Hancock County Chamber of Commerce Tuesday morning at the Career Center.

“Unlike state or federal government, county government is not in the business of making money,” he said. “We spend money to provide the services and needs of the community. That’s our reason; working for the people of Hancock County to improve their lives.”

Roberts said adjustments made in property and occupational taxes years ago have made a difference in revenue for the General Fund which has opened opportunities to not only make improvements in the county, but also to build up reserves for emergencies and unforeseen needs.

“In the past budget, we only spent 62 percent and were able to move the surplus to our reserves,” he said. “The pricing of nearly everything has gone up and we will be able to address our needs in light of that.”

Roberts said equipment such as dump trucks, tractors and mowers, and ambulances can approach hundreds of thousands of dollars, equipment which is vital to providing essential services.

“We have a bunch of blacktopped roads in the county,” he said. “One mile of resurface blacktop costs about $75,000 and maintaining our roads is vital.”

As well, there are upgrades needed to improve emergency communications in the county. Estimates to replace the emergency communication system have come in around $2.3 million, with county government currently exploring funding options. Roberts said a vendor will be at a meeting later this month to offer further explanations to the proposal.

“I don’t care where you are in the county, we need constant, reliable communication from the time of the 911 call, to response, on-scene and from the scene,” he said. “This is project we are told, once complete, will not need to be touched for 15 to 20 years.”

The judge/executive said he is currently seeking advice and guidance on utilizing about $1.6 million in American Rescue Plan Act funding.

“There’s no guide book on a shelf somewhere that says, ‘This is how we spent the money during the last pandemic,’” Roberts said. “How we spend this funding needs to be able to pass an independent audit, and some of those rules have not been worked out.”

As well, county government is awaiting disbursement and guidance on Infrastructure Investment and Jobs Act funding, which was signed into law in late 2021.

The two funding packages total about $3.1 trillion in federal funding across the country.

“I am proud of our Fiscal Court and how we work together,” he said. “There is a very little disagreement in how we serve the county, especially when you compare it to other counties in Kentucky.”

Roberts said he is eagerly watching Kenergy’s application to the Kentucky Public Service Commission to provide broadband internet access across its 14-county service region. The utility provider has a hearing on the matter scheduled for March 31 on the plan to bring access to its members.

“Comcast is great in Hawesville and TDS in Lewisport,” Roberts said. “The competition is needed, but access to those in the rural areas is a business decision. It is vital for those folks to have the option, too. Internet is how we consume, and with telemedicine and distance learning, we see it as a need, not a want.”

Among recent achievements for Fiscal Court:

During the Chamber meeting, President Shanna Nugent said the organization currently has a vacancy in the director position, following the resignation of Stephanie Lamar.

The Board is currently studying the requirements of the position and the pay scale, she said. The Chamber receives no local government allocations and is funded by dues paid by members.

Nugent said the vacancy will be posted in the coming weeks on the Chamber’s Facebook and in the Clarion. She said a busy time for the Chamber is approaching with the Farm to Table Dinner and several warm weather events the Chamber is typically involved in.