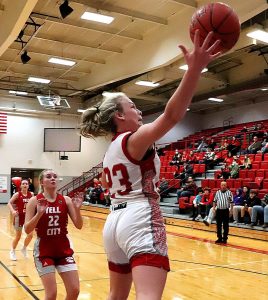 “Our girls played hard tonight (Monday). I’m really proud of them for their effort and commitment to the defensive end,” HCHS coach Kevin Husk said. We forced 29 turnovers and scored 20 points off turnovers.”

Poole buried a 3-point basket and House and Alexis Gay scored to help give Hancock County a 9-7 lead at the end of the first quarter. Lily Roberts hit two shots and Layni Roberts hit one during a second frame that was all HCHS. House connected on 4 of 6 foul shots and the Lady Hornets defense held the visitors to six points.

Leading 25-13, the Lady Hornets began the third period with confidence. House  scored four points on drives to the basket while Poole and Lily Roberts chipped in two points each.  Hancock won the frame 8-4 to increase the lead to 33-17.

Poole splashed another “3” in the fourth and House, Lily Roberts and Ansley House all scored at the rim for HCHS. The girls held the Lady Marksmen to one field goal over the final eight minutes to secure the 25-point win.

“We had 26 points in the paint compared to the bigger Tell City’s 12. That kind of effort and toughness leads to us being a better team and not relying so heavily on our shooting,” Husk said.

The Lady Hornets are moving in the right direction having now won four of their last five games.