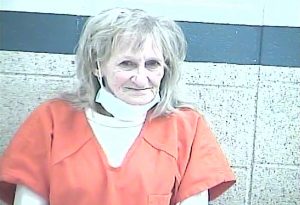 A Hawesville woman has been jailed on an indictment warrant, charged with second-degree manslaughter and tampering with physical evidence, resulting from an investigation by the Hancock County Sheriff’s Department.

According to court documents, Connie Jean Oden, 69, of 157 River Street, was arrested Jan. 4 following a Dec. 22, 2021, indictment by the Hancock County Grand Jury.

Oden is alleged to have assisted in administering methamphetamine by intravenous injection into the body of Wayne “Scotty” James, sometime on or between Sept. 23-24.

According to obituary information published in the Hancock Clarion Sept. 30, James was 56 years old and was originally from Tell City. He is survived by a daughter and three grandchildren, as well as two sisters and several nieces and nephews.

She is also alleged to have “knowingly destroyed, concealed, removed or altered physical evidence which she believed was about to be produced or used in an official proceeding with intent to impair its verity or availability.”

The investigation was conducted by Deputy B.J. Burton of HCSD.

Oden is currently being held at the Breckinridge County Detention Center on a $50,000 cash bond. She was arrested by Burton at a residence located at 235 Wood Street in Hawesville.

Oden is scheduled for arraignment on Jan. 25 in Hancock District Court.