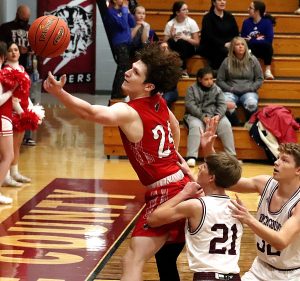 “We played really well defensively, especially in the second half. We didn’t turn the ball over and we hit our free throws down the stretch. This was a hard fought win,” HCHS coach Mike Orr said.

Hancock County got rolling offensively in the first quarter, but so did Storm.

“We started off in a zone and they hit their first six or seven 3’s. We tried another zone and they were hurting us on the boards,” Orr said.

Keown and Powers both splashed 3’s during the second quarter and Luke Brown chipped in offensively with four first half points. The two teams played evenly on the scoreboard as the margin remained the same, with Hopkins County leading 41-36.

“At halftime the guys said ‘let’s try man-to-man’ so we did and the guys played great team defense in the second half,” coach Orr said.

Powers stepped up to the challenge and guarded the Storms’ top player, Marcus Eaves. Eaves came in averaging 28 points per game.

The defensive switch paid off and the Hornets held the Storm to just 11 points in the third. Hancock won the frame by six and led 53-52 after three.

Hancock County again showed great potential by dominating the fourth quarter. Ogle led the way with 12 points in the frame, including going 8 for 8 at the foul line. Evan Ferry played  solid for the winners, connecting on 5 of 6 foul shots down the stretch. Powers hit another “3” in the fourth and he did a job on Eaves, holding the star player to 15 points under his average for the game.

“Devyn did a great job on Eaves and Ryan got hot for us offensively. The whole team played well.

“We’ve had leads against some of these really athletic teams but we turned it over or missed some free throws, but last night (Monday) we did the things down the stretch that you need to do to win against a good basketball team,” Orr said.

Marion County came from behind to win 56-51 in overtime over Hancock County during the Central Kentucky Christmas Invitational last Thursday at Lebanon.

“We picked up this game on short notice after we got cleared through Covid protocols. We didn’t play particularly well and I don’t think I did a very good job getting us ready,” HCHS coach Mike Orr said. “But we needed a game and I think we got something out of it. We played against a Division 1 athlete and he might be the best we’ve played against all year.”

The Hornets led 13-11 after one quarter as Devyn Powers, Landyn Emmick and Kaleb Keown carried the load offensively for HCHS. Powers and Keown both made 3’s in the second period and Hancock County led 27-22 at intermission.

The Knights began their comeback in the third and trailed by just two points after winning the quarter 15-12. Marion’s top player, James Jewell, carried the Knights throughout the fourth period.

The Hornets led by three points late when Jewell hit a “3” to tie the game. The senior took over during the extra period, scoring eight of his team’s 10 points in overtime as the Knights won by five.

The Hornets took a tough loss on the road when they fell 77-74 against Madisonville-North Hopkins at Madisonville on Dec. 22.

Hancock County was charging from behind in the fourth quarter when time expired.