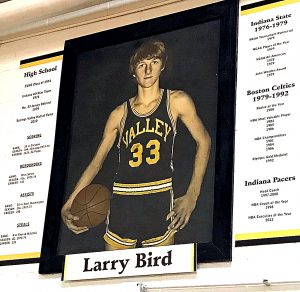 This portrait of basketball Hall of Famer Larry Bird hangs in his former high school gym in French Lick, Ind.

The varsity Lady Hornets took the lead in the second quarter and went on to defeat Springs Valley 41-37 at the home of Larry Bird in French Lick (IN) Tuesday.

“We looked rusty at times but overall I’m really satisfied with how we stuck together and pulled out another win,” HCHS coach Kevin Husk said.

Lily Roberts scored two baskets in the first period and Bailey Poole hit a “3” as the two teams were tied at 9-9. Ella House took over in the second, scoring 10 of the team’s 12 points in the frame. The result was a 21-19 edge for the Lady Hornets at intermission.

Emma Morris splashed a 3-pointer during the third while Roberts and Poole led the way offensively. The girls won the quarter 12-8 and led by six going to the fourth. Springs Valley trimmed Hancock’s lead by two points when time expired.

House scored 12 points and Roberts and Poole had 11 each. Morris had five, and Layni Roberts two.

The Lady Hornets sealed the win at the foul line during a 40-25 victory over Todd County Central in the DQ Classic tournament on Dec. 22 at Hartford.

“I’m really proud of how we finished off the Christmas tournament,” Husk said. “It’s a shame we were only able to get one win, but I think we’ve improved a lot.”

Hancock County won every quarter of play and Ella House led the way in the first with six points. Lily Roberts hit a “3” and scored seven second quarter points to help the Lady Hornets to a 19-17 halftime advantage.

Roberts continued to lead the way offensively in the third as the junior hit another long range bomb while scoring another seven points. Bailey Poole sealed the win by connecting on 6 of 6 from the foul line in the fourth quarter. The HCHS defense held Todd to just two points over the final eight minutes.

“Our defense really won this game for us,” Husk said.

Hopkins County Central spoiled a comeback attempt by the Lady Hornets during the DQ Classic on Dec. 21. The Lady Storm won 62-55 in overtime.

Hopkins led 26-18 at halftime when Hancock began to battle back. The Lady Hornets won the third frame 18-13 then won the fourth 16-13 to force the extra period. The Lady Storm took the OT 10-3.