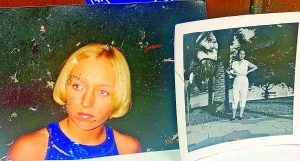 These photos travelled about 150 miles from Marshall County to the farm of Donna and Scott Marsch on Kentucky Highway 2181, about three miles south of Hawesville. The photo of the blonde has been identified as a lady named Caroline from Carlisle County, though the photo was shot in 2000 in Marshall County. It has been mailed back to Caroline.

Several items from the west Kentucky tornadoes of Dec. 10 were found on a farm in Hancock County on Kentucky Highway 2181, about three miles south of Hawesville.

Among the items were two photographs, a Monopoly game card, and graphing paper from a math class. The items were found in a hayfield on the farm of Donna and Scott Marsch.

“I posted the pictures in the Quad State Tornado Found Items group (on Facebook), and within an hour, one picture that was dated May 2000 was identified as a lady named Caroline,” said Leah Marsch. “She was originally from Carlisle County but went to the Marshall County Prom, where the photo was taken.”

Caroline now lives in east Tennessee, so she was not affected by the storms. She told Leah it came from a high school friend’s house that was destroyed when the Dec. 10 outbreak came through the area near Land Between the Lakes.

The picture travelled about 150 miles, pulled aloft in the airborne debris from the powerful storms. The other photo, a black-and-white print of a woman standing near a palm tree on the shore of a body of water has not yet been identified.

“She was very appreciative that I mailed her photo, even though it was all bent up and had pieces of grass stuck to it,” Leah said. “I think this show how people from all over are connecting through the disaster.” 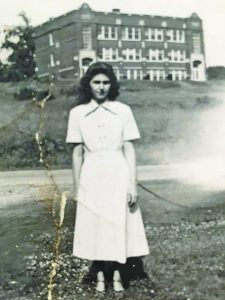 This photo was found by Scott Ray in Reynolds Station, according to a post on the Facebook group. The photo is from Muhlenberg County. The building in the background is the former Graham High School, now owned by Tom and Kim Bard. The property serves as The Bard Distillery. The Bards have been heavily involved in tornado recovery efforts in Muhlenberg County.