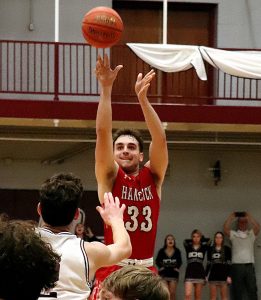 Ogle put Hancock County ahead in OT when his hook shot from 12 feet hit nothing but net. The Hornet crowd rose to their feet with HCHS leading 47-45 with 45 seconds on the clock.

“The hook shot in the post is my main game. I like having the ball in my hands late in the game,” Ogle said.

The Fighting Tigers knotted the score moments later when Isaiah Hart got a rebound and putback at the 30 second mark of the extra period.

Hornet point guard Evan Ferry ran the clock down to 12 seconds then drove toward the basket. Ferry stopped in the lane then passed the ball to Ogle, who was parked behind the arc. The junior took his time then let fly… swish! The Hornet crowd went wild when the ball went through the net to give Hancock a three point lead.

Breck still had six seconds to work with and after a timeout Kolton Miller got an open look at a “3”. The ball bounced harmlessly off the rim and the Hornets celebrated the victory at the home of their district rival.

“Anytime you go on the road and win a district game… I’ll take it,” HCHS coach Mike Orr said. “We grinded it out, we got some big stops when we had to and Ryan made a great shot. It was a fun game.”

Earlier it was Ferry and Ogle who helped give the Hornets a 12-10 lead in the opening quarter. Kaleb Keown took charge in the second by splashing two 3’s and scoring nine of the team’s 11 points. Luke Brown scored a basket and Hancock County led 23-22 at halftime.

Keown drove to the rim and scored on three occasions during the third period. Ogle and Devyn Powers chipped in baskets and the Hornets increased the lead to 34-30.

Eamon O’Donoghue and Mercer Rogers each buried a “3” for Breck in the fourth as the home team tied the score to force the extra period.

Keown led all scorers with 20 points and 12 rebounds. Ogle had 16 points, one board and one steal, Ferry had nine points, four boards and six assists, Powers had three points and three rebounds, Brown had two points and one board, and Landyn Emmick had five rebounds and one block.

McLean County out scored Hancock County 18-6 over the final eight minutes to secure a 45-34 win in the Class “A” tournament at Calhoun on Dec. 8.

The Cougars jumped ahead 11-8 in the first quarter and then increased the advantage to 17-13 at halftime.

Devyn Powers turned it on for HCHS in the third when the junior hit two 3’s and scored nine points in the frame. Ferry, Ogle and Keown all chipped baskets and the Hornets took a one points lead (28-27) into the fourth quarter.

The Cougars’ Jaxson Floyd twice hit from beyond the arc in the fourth and Brady Dame added five points during McLean’s 18-6 run that sealed the win.

The Hornets ran into a tough 4A school when they lost to John Hardin 93-54 in the Madisonville-North Hopkins Holiday Tournament Monday.

Hancock County was within striking distance, trailing 42-28 at halftime, before the Bulldogs went on a 31-11 run in the third.