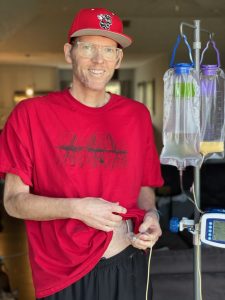 I haven’t been able to eat anything by mouth since about April. I’ve gotten 100 percent of my nutrition, both food and water, through a feeding tube, but that’s been fine because I was never all that into food. But lately I find myself obsessing and even dreaming about the foods I used to take for granted.

The other day I woke up with the distinct taste of my grandmother’s dumplings and dressing in my mouth. For those who didn’t know my grandmother Irene Taylor, she was a retired home economics teacher so she knew her way around a kitchen. She died in 1996 but I could taste those dumplings and her baked dressing as clearly last week as I could when she was still cooking for all of us every Sunday at her farmhouse.

As I woke I actually lay there for a while longer just savoring the flavors that I hadn’t experienced in at least 25 years. It was heavenly.

A few nights after that I dreamed that I was eating these enormous, greasy sausage biscuits. That dream harkened back to another little tradition of mine because I used to stop by McDonald’s at 5 am every Wednesday for two sausage biscuits, which I would eat at my desk as I wrote that week’s stories.

Thanksgiving was really tough because there were endless commercials and mentions about juicy turkeys and various gravies. I even started to look away on almost every fast food commercial with their close-ups of burgers and pizzas and other off-limits delicacies.

I’ve turned into a weirdo who now tells stories about having eaten at places and what I liked to order there. It’s like I’m showing everyone around some interesting place where I lived years ago and now I won’t shut up about it.

I drive by Five Guys and reminisce about how many fries they used to give me and tell stories about how I used to eat at Buffalo Wild Wings on their discount wings night, which now looking back I should’ve done much more.

I really used to not care much about food, even the ones I liked the most, to the point that I often said that if I could take a pill to not have to eat I would because it would save me so much time. How foolish that sounds now.

Last week I got a new feeding tube. It wasn’t nearly as exciting as getting a new almost anything else, but it was still a blessing. It has saved my life, quite literally.

My esophageal cancer means my esophagus is closed off with a tumor so no food or liquid can pass through, so without my feeding tube I would have starved to death, which I was slowly doing before my fiancée Jamie convinced the doctor in April that I needed a tube.

My first tube broke down and began to crack apart, meaning the connection between my body and the feeding machine would often come apart, leaving me to wake up in the middle of the night in a puddle of thick, tan formula that would dry and harden almost like glue.

This new one has a screw connection so it can’t come apart so easily, so it’s been nice to be able to relax in my dryness.

But while a whirring machine is feeding my body I’ve come to realize it’s just as important to feed my mind and my soul.

I still find it difficult to concentrate, but I’m trying to place more emphasis on things like reading my Bible each day and keeping up with the daily news more than reruns of comedy shows.

It’s important to get out and see things, like the new location of the VW shop that’s close to Jamie’s house, what kind of crowd is at the new Mexican restaurant, or even better, the beauty of the now bare trees that line our country roads or the Christmas lights that someone put big effort into.

Unlike my feeding tube, nothing is going to automatically feed my soul and mind. I can starve them just the same if I’m not careful and my personality, empathy and enthusiasm will shrink just like a starving body.

Let’s all strive to fill our minds and souls only with what is meaningful, beautiful and fulfilling. And if you want, maybe have some dumplings and dressing for me.