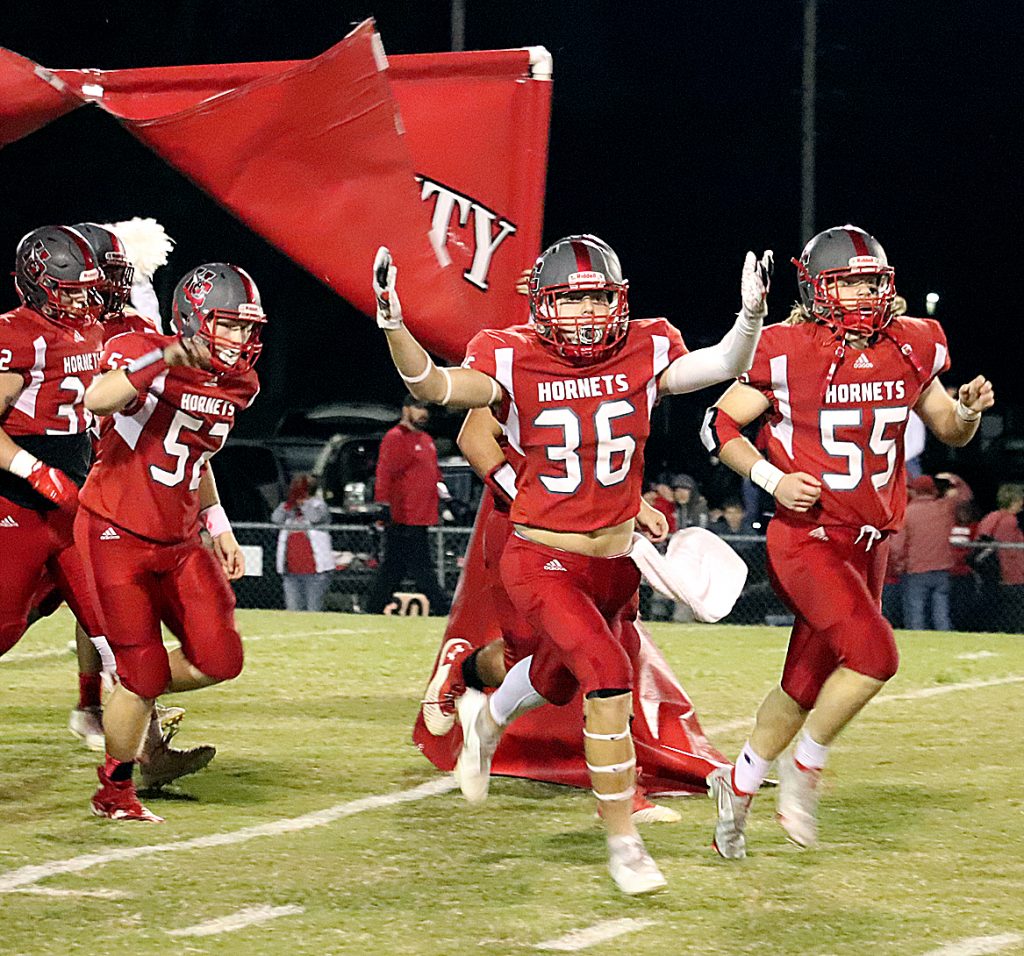 The football playoffs begin Friday night and the Hornets go on the road to Elkton to take on the Todd County Central Rebels. Kickoff is scheduled for 7:00pm.

Friday’s contest is a rematch from a game played here on Oct. 22 in which the Hornets lost 20-14 to Todd County. Hancock County led 14-0 before the Rebels made their comeback. The Hornets were victimized by four turnovers during the game.

Hornets coach Bobby Eubanks talked about the keys to victory for his team.
“If you go back and look at all of our losses, with the exception of one, it’s been turnovers and lack of execution that’s hurt us. If we can clean that up this week we’re going to win a game.”

Both teams are coming off losses in their final regular season games last Friday. The Hornets (6-4) fell 41-14 at Louisville Holy Cross, while the Rebels (3-6) lost 14-0 at Green County.
The Hornets will be without quarterback Cole Dixon for the remainder of the season after he suffered a torn ACL back on Oct. 15. Dixon was replaced by junior Drew Lyday, who has performed well in his new role as QB1.

Lyday has completed 24 of 32 pass attempts for 241 yards, with two touchdowns and one interception during his time as signal caller. Lyday has also shown the ability to run with the ball, rushing for a combined total of 102 yards with one TD during his limited time at quarterback.

Gavyn Nolan is Todd’s QB. The junior has thrown for 844 yards, with 10 TDs and four INTs over nine games played. The Rebels leading rusher is Omarion Riddick with 783 yards and six TDs, and Nate Reding is the leading receiver with 464 yards and six TDs.

Hancock’s leading ground gainer is junior Logan Willis. The powerful fullback has 1,161 rushing yards this season for an average of 116 yards per game. Willis also leads the Hornets with 11 TDs on the season. Noah Mize is the next option in the running game. The senior speedster ran for 126 yards during a win over McLean County on Oct. 15. Mize has 409 yards and six TDs on the season.

The Hornets’ leading receivers are Kaleb Keown and Austin Volocko with 310 and 286 yards respectively. The two juniors have scored three TDs each through the air.
The HCHS defensive leaders are Christian Richards, Jack Duncan, Aiden Weatherholt, Alex Basham and Volocko.

Duncan leads with 113 total tackles on the year. The junior has 10 tackles for loss and two sacks. Weatherholt, a sophomore, has 111 tackles with five TFLs and a team best eight sacks. Richards (senior) has 74 stops with 10 TFLs and three sacks. Basham, a sophomore, has 48 tackles, 11 TFLs and four sacks. Volocko (42 tackles) leads the Hornets with four interceptions.

“If we play fundamentally sound football then we’re going to be Okay. We have to execute and we have to take care of the football,” Eubanks said.