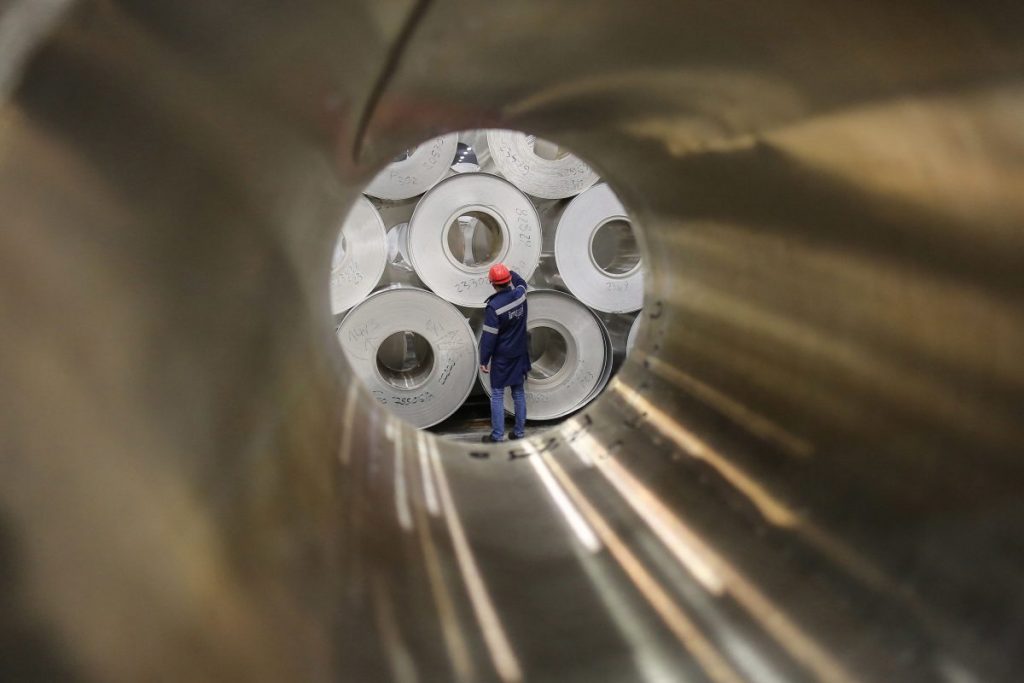 China is facing an energy crisis.

The global industrial power produces about 56 percent of its electricity through thermal production methods, utilizing coal, much of which is imported from Australia.
The energy shortage has resulted in significant impact to China’s manufacturing sector in the three main industrial provinces – Jiangsu, Zhejiang and Guangdong – as officials have begun rationing electricity while favoring residential use over industrial.

Impacted industries include aluminum, steel, chemical, agricultural and textiles manufacturing. American companies such as Apple and Tesla operating in China have also been forced to halt production.

What Could This Mean For Local Industry?

Mike Baker, Director of the Hancock County Industrial Foundation, said the Chinese woes could be very beneficial to the aluminum industry in the county.

“Century Aluminum, Commonwealth Rolled Products and Southwire are in a great position for the future,” Baker said. “This is an interesting situation for the American aluminum market; as things occur around the world, when you pull the rope in one place, it moves in another.”

Baker said the industry has been stable through the COVID-19 pandemic, which has kept Hancock countians working when other communities were severely impacted.
“With three of our four largest employers in the aluminum industry, and Domtar doing very well, we have stayed busy in the county,” he said.  “We’re seeing very good pricing in aluminum, especially with China pulling back production in the global market.”

“There is a great market for aluminum going forward,” Baker said. “By 2025 to 2030, half of the vehicles produced in the United States will be electric, and those automobiles will be built primarily from aluminum. Commonwealth is strongly tied to that part of the market. Century is only one of five smelters in the United States, and remains strong for the future.”

A recent military coup in Guinea has caused concern for aluminum producers around the world, as the west Africa nation is the third-largest producer in the world. Bauxite is the primary source of aluminum. Australia and China are the top producers in the world, though Guinea has the most in natural reserve at 7.4 billion tons. Vietnam claims to have reserves of 11 billion metric tons.

Aluminum futures are up 45.53 percent over the past year, though the industry has seen an eight-weeks-straight decline since posting the historic high. Futures were down 6.3 percent for the month of October.
“One of our advantages is that our local aluminum industry is part of much larger corporations which are performing very strongly in recent months,” Baker said. “A person could have made a decent living buying and selling Century stock this year based on its performance.”

Century Aluminum stock has risen from $6.70 a share on Nov. 2, 2020, to $13.10 at close of trading on Nov. 2 this year. The high share price for the past 12 months was $19.05 on March 11.
Chalco, a Chinese aluminum producer and the world’s largest, posted third quarter profits that were its highest in eight years while earning $349 million.

Alcoa – the second-largest producer in the world – posted record profits, as well, as revenue increased 31 percent in the third quarter from a year earlier: the company earned $337 million in the quarter.
Century Aluminum said in a news release the company was to report its third quarter earnings following close of trading Wednesday, which fell after the Clarion’s print deadline.

What’s Behind The Energy Rationing?
In the post-pandemic economy, demand for electricity in China increased dramatically as manufacturing facilities began to ramp up again, translating very quickly into a shortage of suitable coal for energy production.

There is no purely simple explanation for the coal shortages in the world’s second-largest economy: an unofficial ban on Australian coal imports has been in place since 2020 after Australian leadership called for an international investigation of China’s handling of the COVID-19 outbreak.

An estimated one million tons of Australian coal has been sitting in bonded Chinese coastal warehouses for more than a year, though Reuters has reported small quantities have been released by Chinese customs officials. It remains unlikely China will lift the unofficial ban any time soon.

As well, Chinese coal mines have fallen under much stricter safety guidelines from regulators in the communist country, just as demand for coal has picked up. This has added to substantially increased costs to power producers, and CNBC has reported those increases have reached as high as a 200-percent increase from a year earlier.

Electrical power generating plants which have been configured to burn Australian coal would require a complete expensive overhaul to be able to burn Chinese or any other imported coal.
Chinese officials have said fluctuations in power production at coal-fired facilities could reach as much as a 20 percent reduction in power reaching the distribution grid. When coupled with a 20-percent increase in electric utility pricing and shifting to a 100-percent market pricing for industrial customers, many facilities face a financial inability to do business.

China is currently seeking more coal production from Indonesia, though that country’s mining industry is facing its own limits as it reaches peak capacity. As well, the global superpower is seeking increased imports from Russia and Mongolia, and has even began buying more coal from Atlantic markets such as the United States and Colombia, according to MSNBC.

With the approaching winter in China, power production challenges could result in much more than rationing and cities turning off their streetlights. If Chinese power companies are unable to secure winter supplies “at all costs,” as directed by the central government, the impact on the every day lives of Chinese citizens could be devastating, according to U.S. State Department reporting.