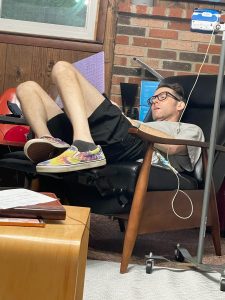 I figured out recently that I have a bed sore. It turns out I’d had it for quite a while but I had largely ignored it, hoping that whatever it was would just go away.

It got me thinking that my raw tailbone is a little like life – if you don’t keep moving things get a little worse and if you ignore them they get more and more raw and you just sort of rot in place.

I earned this bed sore. I’ve settled into a pattern of lying in bed watching Portlandia and Forensic Files reruns, content to just be awake and say that’s better than I used to be not long ago. It’s true it is better than I was at one point where I did nothing but sleep, but why am I comparing my current situation to one of the worst ones in my life? Why aren’t I comparing myself now to times when I was up getting things done and interacting with others, enjoying life? Back when I was moving?

Apparently this sore started when I was in the hospital dying, but I didn’t know what it was. I thought it was some remnant from any number of the horrifying things they did to me while I was in there, so I thought that with enough time it would go away on its own.

As time progressed I thought it was some kind of stain that I could scrub off. That absolutely didn’t work. Then I thought it seemed like something I could chip off like an old scab. I’m not sure why I even tried that but I did, which turned out to be a pretty bad idea.

I continued to ignore it until one day when I got out of the shower and I was standing in front of the mirror and I realized that all I had to do to know what was going on was to turn around. There it was, two spots on my tailbone. Why hadn’t I ever looked before? I’d never looked because I was too busy ignoring it.

Now I’m taking care of it. I’m moving a little more. Rolling on my side while in bed and trying to sit in chairs to take the pressure off of it as much as I can. I’m slathering salve on it.

Guess what? It hurts more now than it ever has.

I could tell myself that I was better off when I was ignoring it, but it was slowly getting worse and endangering my health. But it was so easy and comfortable. At least now it’s getting better.

I’m finding that it’s a good parallel to my current situation because moving, literally and figuratively, is hard. I’m tired and I don’t want to stand up and walk around, but I have to for my health. I don’t want to stay engaged in the world and get out and talk to people because it’s so much easier and comfortable to just zone out to TV.

Going out for a short walk in the yard sometimes is difficult and sometimes it hurts, sometimes it wears me out. But it never hurts me and it’s always beneficial. I need to move more or else I’ll just rot in place.