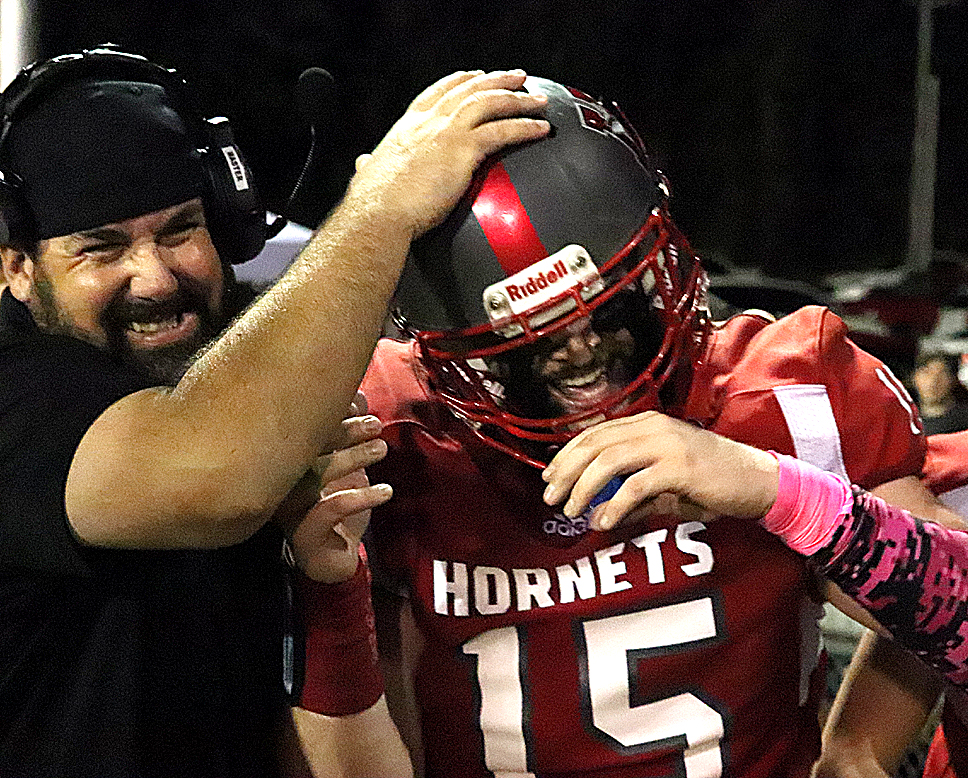 It was a district battle ‘til the end when Hancock County defeated McLean County 22-12 here at Schafer–Glover Field Friday. The win put the Hornets in the driver’s seat for a home playoff game, but they still need to beat Todd County tomorrow night to secure it.
“This was a good win. The kids really pulled together and almost put in a complete game,” HCHS coach Bobby Eubanks said. “We dipped a little in the third quarter when we didn’t get the score, but they got it done.”

Cole Dixon put the Hornets ahead when he scored on a 22-yard touchdown run on the first offensive series of the game. The score was set up by a great pass and catch from Dixon to Austin Volocko moments earlier. Volocko went up high and tipped the ball up then made the grab on the way down for a 31 yard gain. Logan Willis scored the conversion when he crossed the goal line running behind the Hornets’ offensive line to make the score 8-0.

The Cougars looked to answer on their first possession and they came close. McLean faced a fourth–and–long near midfield when Ayden Rice threw a long pass that was deflected and caught by Zach Clayton at the Hornets’ 20 yard line. The Cougars eventually moved the ball to inside the five yard line, but a bad snap and a loose ball was recovered by Hornet senior Jake Frames.

Logan Willis carried the Hornet offense into Cougar territory during a second quarter drive and Dixon had a big run to inside the red zone before disaster happened. The play was called back on a penalty, but the worst was that the team’s quarterback went down with an injured knee.

Dixon had previously missed action after he sprained his left knee during a game here on Sept. 17. He hurt the same knee Friday night and the junior will miss an undetermined amount of time.
“Cole was on pace to have a career night when he went down,” the coach said.

Drew Lyday entered the game at QB and a few plays later he connected with Volocko on a screen pass. Volocko utilized his blockers and raced into the end zone for a 31-yard TD to make the score 14-0 with 9:38 remaining in the half.
“Drew came in a finished it. He played well, and Austin had some big plays,” Bobby said.

The Hornet ‘D’ stepped up big during McLean’s next drive. The Cougars needed to respond, but Aiden Weatherholt flew into McLean’s backfield and sacked the quarterback on two consecutive plays.
“Aiden was flying around the field on defense,” the coach said.

Noah Mize came alive and had a big run down the right sideline that put the Hornets in scoring position at the Cougars’ 30 yard line. The drive eventually stalled and the teams went to the locker room with Hancock County leading 14-0 at halftime.

The Hancock defense made another big stop when McLean took possession to begin the second half. The Cougars advanced the ball across midfield, but faced a critical fourth–and–two when Weatherholt and Christian Richards made the stop short of the line to gain.

The Hornets took over and Mize got loose around the left side for an 18 yard gain. Two more nice runs by the senior gave HCHS a first–and–goal at the 10 yard line. Mize then carried to the two and Willis followed with a run to the one yard line. Mize looked to have scored on the next play, but the TD was negated on a holding penalty. Another apparent scoring run by Mize was called back and Hancock County later turned the ball over on downs.

McLean began a long drive that carried over into the fourth quarter. The Cougars began to utilize their power running game and converted multiple third down tries. The drive was capped off by a 1-yard TD run by Clayton and the score was 14-6 with under eight minutes remaining on the clock. Volocko came up big and defended a pass attempt on the conversion which maintained an eight point lead for the Hornets. The Hancock offense moved the ball to near midfield, but could not move the sticks and were forced to punt.

The Cougars took over on their own 27 yard line for what would be their most important series of the game. Clayton had a big gain to near midfield and the Cougars took a shot down field. James Haerle took the snap and threw deep, but Kaleb Keown had the play covered and the big cat intercepted the pass at the Hornets’ 22 yard line.

Keown was not content to go down as he carried a defender for about five yards. The junior eventually found a teammate to lateral the ball to. He flipped the ball towards Volocko, but Christian Richards jumped in front and snatched the ball… saying ‘this one is mine’. The senior then took off down the field.

Richards was nearly stripped of the ball at the 35 yard line, but he got free and kept running all the way to the 48 yard line. The incredible defensive play all but sealed the win for the Hornets.
“I could see what was about to happen and I was like… ‘oh my gosh’,” Bobby said.
If that played didn’t secure the win, the next play did when Mize took a pitch running left. Mize got nice blocks from Volocko and Landyn Emmick and that was all he needed as he out ran defenders to the end zone. The 52-yard TD run followed by a successful conversion run by Willis gave the Hornets a 22-6 lead with just over two minutes on the clock.

“They really didn’t have an answer for Noah’s quickness. He had a great game,” Eubanks said.
The Cougars weren’t quite ready to quit and Clayton caught a long pass. On the next play Clayton ran crossed the goal line from seven yards out for the TD. Aaron Garrett made the tackle to prevent the conversion and the score stood at 22-12.

Jack Duncan recovered an onside kick attempt by McLean and the Hornets ran out the clock to improve to 6-2 on the season and 3-1 in district play.
“Kaleb played well on offense and defense. We didn’t throw the ball to him as much as we would have liked to because they were double covering him. But, we put him on their best guy, at corner, for the first time in his life, and he did the job.”

Weatherholt led the defense with a career high 18 tackles that included two sacks and one tackle for loss. Duncan had 13 stops, Christian Richards 8, Emmick 5, Colin Johnson (2 TFLs), Lyday (1 TFL) and Braydon Wathen all had 4 each, Frames had 3 stops and the fumble recovery, Alex Basham (1 TFL) and Volocko had 3 tackles each, JT Richards, Willis, Keown (INT) and Mize all had 2 stops each.

Dixon completed 4 of 7 pass attempts for 76 yards. Lyday was 6 of 6 for 62 yards.
Mize led in rushing with a career high 126 yards on seven carries. Willis ran 11 times for 34 yards, Dixon had 3 carries for 29 yards, Keown ran once for nine yards, Weatherholt had one carry for four yards, and Lyday ran four times for one yard.