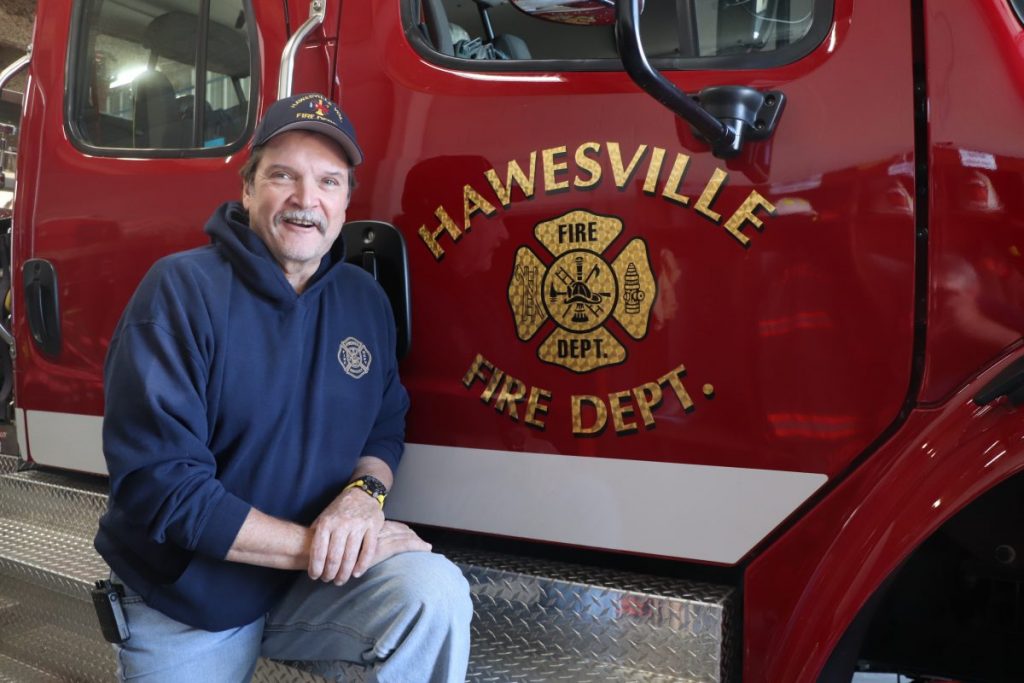 The first fire I went on, I rode on the back of the old pumper we had then, all the way out there. They had been spraying water and they said, ‘o.k., we are going to draft water from the pond,’ and I put on hip boots and went into the pond and held the end of the draft nozzle, so it wouldn’t suck up a lot of dirt. The boots didn’t help. I got soaking wet… But, getting on the end of a nozzle for a little bit and I was just hooked. I got in 48 years (of being a fire fighter) this summer.”

“Sometimes it has been hard. It is hard to see people’s homes burnt to the ground and they are left with nothing. But then, if we didn’t do something, what would be left? Sometimes we are lucky enough to save some things. I remember my buddy’s house caught on fire one year and we were able to save his wife’s pictures. At least we did get the pictures of his family and friends out,” he said.

Hugh has worked for EMS, off and on, for over 23 years. “I’ve worked with a lot of good EMTs and paramedics,” he said. “I don’t think the public realizes how many lives these paramedics save every day. They work long hours… The size of our fire department has dwindled down. At one time, we had around 35 members and now we are down to 13, plus the chief. It is not like it was when I was younger; people were chomping at the bit to get in that station…We need more people. We need more help. We need people who are going to be dedicated and want to put in the time.”    “One of the worst fires I’ve ever been on…the little Axton girl died. We tried to concentrate the most water on the area where we thought she was at in the house, but she was already gone…Like Kyle Veach said, ‘we wear our scars on the inside.’ I’ve worked with a lot of good people.

“A lot of people have trained me. Some of them have retired now and moved on. We lost a good man and fireman last year, Rick Montague. He trained a lot of people. He saved a lot of lives himself. He always had time for people. In the 26 years that he was chief, we progressed as a fire department. He made it what it is today,” Hugh said.

Ogle has been on the Fire Prevention Committee for over 30 years. When Dale Edwards was the head of fire prevention, Hugh worked under him. Rick Montague was chief then and it was his idea to come up with a puppet show about fire prevention and safety that the children could relate to. They also decided to go to each house in Hancock County and make sure everyone had a working smoke detector. They installed 250 smoke detectors in homes. It took them a little over a year, Hugh remembers. “We felt like we were a little closer to making the public feel safer,” Hugh said.

There had been a rash of fires that year and completing that project was necessary.    Hugh was the Dive Team Chief for 9 years. A lot of the guys in the fire department have been on the team. He said it was hard getting the Dive Team started at first. When Montague became the Emergency Management Director, he moved it in the direction to get the team started. There are currently 12 members. They respond to incidents in the county and surrounding areas. Wayne Stanley is chief now.

Hugh is still a Dive Master, who helps teach at Blue Meridian Dive Center in Owensboro. There are 18 different exercises to learn in the pool and then the Open Water Diver courses are taught in Illinois at the quarry. Those courses require 4 different dives in open water. “We have to watch those people. We watch out and make sure they don’t get into trouble and if they do, we help them.”

Recently, they did an exercise at Jeffreys Cliffs. Hugh explains, “Part of the fire department and Emergency Management, is they have to do a couple of exercises every year. EMA asks the Dive Team, Rescue Squad, or the four fire departments to get involved in this exercise. That’s what we were doing on Saturday. Sage Tongate went out in the woods up at Jeffreys Cliffs and hid herself. Kyle Veach was over this with Emergency Management. He and Jason Bevill gave us all maps of the area. The rescue squad and three departments were there: Dukes, Hawesville and Lewisport.

We all divided up and searched different areas and trails around the cliffs. I was with the four people that found Sage. We did the exercise for treating wounds and put her in the Stokes Basket and transported her on top of the Firecracker unit. It had a place for the Stokes Basket and is like a 4-wheel-drive kubota. We transported her and drove her back to the area where we would put her in an ambulance. Or, we have two different sites there, for a landing by Air Evac, if needed.”

Ogle is involved with collecting blood for Western Kentucky Regional Blood Center, and has given 31 gallons himself. “A lot of the guys in the department give blood. They just had a blood drive last week.”    They also collect money for Muscular Dystrophy and Crusade for Children on Memorial Day weekend. “A small department like this, we collected almost $2,500 this year,” Hugh said.

Ogle grew up in Hawesville. His parents are Mary Perkins Ogle and Roy Edmond Ogle. His sister is Eleanor Adkins.    He graduated from Hancock County High School in 1969, attended Western Kentucky University for two years and earned his Associate Degree in Fire Science Technology from Jefferson County Community College (UK Extension), along with training classes at OCC and continuing training classes all over the state; Henderson, Owensboro, and the Kentucky State Fire School in Lexington, for 3-4 days in June, every year.

“We have two fire schools in Daviess County; Officer’s School is in February and the hands-on school at OCTC. I’ve taken classes there too,” he said.    He worked for Century Aluminum for almost 44 years. He is on the Indian Lake Board and is responsible for tending to the lake and mowing.    Hugh has two sons: Jeremy L. Ogle and Zachary T. Ogle. Both live in Colorado.    Connie Duncan and Hugh have been together for 18 years. They have 4 grandchildren: Kyla, Karson, Jaelyn and Jack Duncan. Jack plays football for HCHS.