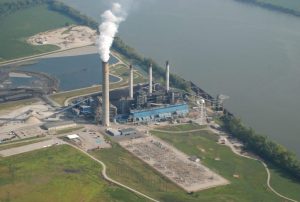 Earlier this year Big Rivers Electric Corporation started the process of dismantling the Kenneth Coleman power plant outside of Hawesville. The company shuttered the facility a few years ago, and made the decision to take the plant down shortly thereafter.
“As of now, it will be late spring or early summer of 2022 before the site is cleared,” Big Rivers’ spokesperson Lesley Krampe said. “We will have a marketing plan in place once we get closer. Big Rivers along with the Hancock County Industrial Foundation will get the word out to site selectors, the cabinet for Economic Development and other large companies looking for property.” 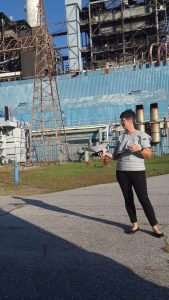 Though the property is not yet on the market, some early interest was expressed in the site.
“We showed it a few times, but those prospects have since located elsewhere,” Krampe said.

Hancock County Industrial Foundation Director Mike Baker spoke highly of the site as a future location for a new industry.

“It has several benefits that work in its favor for manufacturing or other types of industrial facilities to move in there,” Baker said. The most important benefit is its location on the river. In addition, a working barge loading and unloading facility exists on site.
“We will leave the barge terminal facility that is currently there,” Krampe said.

The Coleman site also possesses all of the necessary utilities and services to allow a company to literally start to build immediately. With a power generating station sitting on that property for approximately fifty years, it already possesses amenities such as gas, water, electricity and sewer sized to serve a large industrial facility.

“The infrastructure being on site makes that property almost shovel ready or build ready,” Baker said. “There is not a lot of the normal preparation and infrastructure that would have to be constructed at a typical Greenfield site.”

Needing to add such services to a site adds to the cost of constructing a facility, and also to the time needed to get a plant up and running. Baker said industrial prospects today do not want to add these services to a build site; they want these services already in place. For this reason, the Kentucky Cabinet for Economic Development continues to push counties to make sites available with pre-existing infrastructure.

“When you combine river and rail service with a working barge terminal and more than sufficient electrical and natural gas utilities on site, that makes for a very promising potential industrial site for Hancock County,” Baker said.

Another advantage to the site is its physical location to two large industries being built not too far away, one in Meade County and the other in Glendale, KY near Elizabethtown.

Baker said the Coleman site being within 550 to 75 miles of those sites gives Hancock County an excellent change of landing a support industry for either one, or both, of those two plants.

“This site could be a very attractive for vendors or suppliers to those plants because of its close proximity and being on the river,” Baker said. “A company would be within an hour or two hours by truck of being able to deliver product to those plants.”

As of press time, Big Rivers continues to examine options on dismantling the facility. The company does not know if it will dismantle the boiler or implode it.
“All four stacks will be imploded,” Krampe said.

In addition, a 20,000 square foot warehouse will also remain on the property, Krampe said.
“This structure could be used as a construction trailer as the site is being developed for a new project,” Krampe said.