The Hancock County Sorghum Festival hosted by Independence Bank takes place Saturday, October 30 at 10 a.m. at the Hancock County Fairgrounds. The fairgrounds are located at 1430 state Route 1389 in Hawesville.

Organizers plan a day full of family fun, in addition to demonstrations on how to make delicious sorghum! The day’s activities consist of a tractor show, craft vendors and a quilt show.

In addition, food vendors and food trucks plan to be on site offering a variety of delicious treats for every palate. Sample Free Biscuits and Sorghum!

And as always, it costs the same price to get in—nothing!

Admittance is free, but volunteers will be at the entrance taking non-perishable food donations for the Hancock County Back Pack Buddies program. 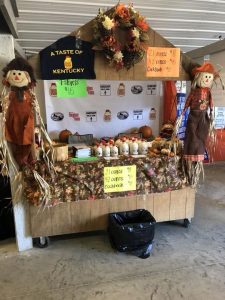 Hancock County, a small county in Western Kentucky,with a rich history in sorghum, touts a strong industrial and agricultural presence, but is also known to be the  “Sorghum Capital of the World.”

Sorghum syrup is a natural sweetener similar to sugarcane molasses. The tall crop is a gluten-free cereal grain with deep roots in civilization’s past and in our own American history.

As refined sugars became more readily available and less expensive after World War I, sorghum syrup production slowed in the South… except in Hancock County.

Like corn and other grains, there are different varieties of sorghum. Some types of sorghum are a popular feed for livestock, a hybrid form can produce bioenergy, and then there’s sweet stuff. Instead of being grown for the grain, sweet sorghum accumulates sugars in the stem. Those stalks are cut, collected, and crushed similar to sugarcane, and the juice must be cooked quickly to avoid fermentation. The result is an acquired taste of yesteryear – sorghum syrup. 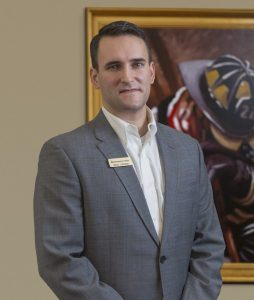 Wade Gaynor, President of Independence Bank of Hancock County, personally invites all of Kentucky and surrounding areas to the Sorghum Festival.

Independence Bank was instrumental in revitalizing the sweet tradition nine years ago.

ANOTHER JUICY TRIP DOWNFIELD— In 1972 the Swihart brothers cane harvesting machine gathers in two rows at a time. The cane stalks are crushed in a mechanism on the side of the harvester; the sorghum juice is filtered and flows through the hose into the 600-gallon tank-wagon. The Swiharts said it requires about one hour to fill the tank. 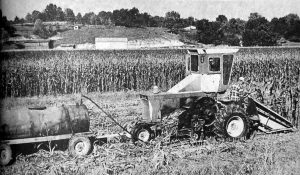