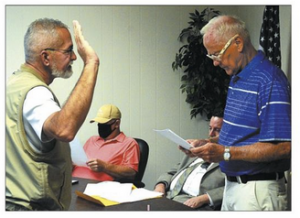 Rob McCormick was sworn into the Hawesville Council by mayor, Charles King last Wednesday. He replaced Joy Haycraft on the council. Haycraft moved to Owensboro, KY.

Council member Wayne Herndon made the motion to nominate McCormick for the seat, and council member Kevin Linn provided the second. All of the council members approved the measure, and Hawesville Mayor Charles King performed the swearing in ceremony.

The council also held the first reading of two ordinances.

The first ordinance concerned the ad valorem tax rates for the city.
“We have not raised the city taxes—personal or vehicles in any way,” Mayor King said.
The city kept the real estate property tax rate the same at 39.4-cents per $100 of assessed valuation; the personal property tax rate remained unchanged at 75-cents per $100 of assessed valuation and the vehicle tax rate stayed at 41.28-cents per $100 of assessed valuation. The ordinance will be passed on its second reading on October 12, 2021.
Also, the city held the first reading of an ordinance to close part of Upper Monroe Street in Hawesville. The long abandoned road had overgrown and was no longer passable. All of the affected property owners adjacent to the roadway agreed to the closure, with the property owners on each side of the roadway receiving half of the 50 foot wide strip of land containing the road. The closed portion of the road starts where the road joins Jennings Street and stretches 250 feet in a generally north-south direction.

The ordinance will be passed on its second reading on October 12, 2021.