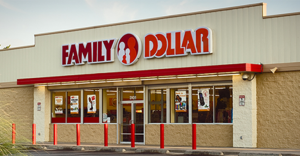 The retail scene in Lewisport continues to grow as Family Dollar Store plans to build an outlet by Hancock Bank.  Lewisport Mayor Chad Gregory made the announcement at Thursday’s city council meeting. He said all of the company sent all of the plans to the Hancock Urban Planning Commission for approval.

“The growth has been phenomenal especially in the retail,” Gregory said. “I could not be more pleased. I always knew it would happen, the only question was when.”
Gregory said Family Dollar purchased the lot between Hancock Bank and the Los Nopales Mexican Restaurant on U.S. Hwy 60. He said before construction on the facility begins the lot needs much groundwork.

“They’re going to have to fill that lot in to get it above the flood plain,” Gregory said.

The news also pleased Hancock County Judge/Executive Johnny “Chic” Roberts. He said the county is blessed due to the manufacturing facilities here, and this new business helps the county.
“Growing jobs five or 10 at a time is impactful to our community as well,” Roberts said.

In the past three years Lewisport realized the addition of several new businesses to the town. AWR Storage built a new facility on U.S. 60 in Lewisport, the owners of Jumpin’ Jacks opened Lewisport Liquor and Wine in the truck plaza, Rob McCormick purchased Ace’s Guns and moved it into the shopping plaza on the south side of U.S. 60, Larry and Monie Sosh opened Truly Gifted in the same plaza. Los Nopales started renovating the old salvage grocery store on U.S. 60 for a new restaurant, and Kerr Automotive opened in the old Shell gas station beside Crossroads IGA. Tim Taylor opened Regal Motor Sports on Fifth Street in Lewisport, the Romo family opened the Blue Agave Tavern in downtown Lewisport last week, and also continues to work on opening a restaurant in the old Goal Post location.

“Any small business that comes into the area benefits the consumer because it gives them choices,” Roberts said. ‘We certainly welcome them. It is good for our community.”
Also, earlier this year a major convenience store chain started looking at Lewisport as a possible location for a store. According to reports, the company expressed interest in two lots in Lewisport: the vacant lot beside Fred’s Pharmacy and the Fred’s Pharmacy building.

“I have never seen the growth like this before,” Gregory said. “I hope it keeps up!”