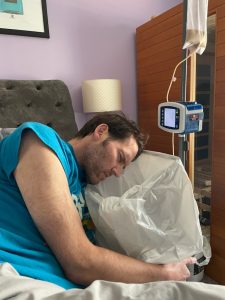 Legendary comic Norm Macdonald died this week after a secret battle with and undisclosed form of cancer. I found it very interesting that he chose to keep his diagnosis a secret from his fans and so many who knew him but in many way I completely understood. “He never wanted the diagnosis to affect the way the audience or any of his loved ones saw him,” his producing partner Lori Jo Hoekstra said in a released statement. Macdonald didnt want to become all about the cancer. I didn’t want to either when I found out about my stage four esophageal cancer in late April. Here’s what I wrote in my phone as I rode in the car leaving the doctor’s office after just being told I have cancer: “I don’t want to be a cancer guy.
There’s so much more to life than dying.” But although there’s more to life than dying, there’s more to not dying than just staying alive, but I feel like I’m letting myself down in that category. Lately I feel like I can’t do a single thing for myself. I used to look at everything either as a challenge or no big deal with enough effort, but lately it seems I see everything as some insurmountable feat that would be impossible even on my best day. The thing is I know I can do more but it feels like I can’t even get close to even doing enough. Tuesday Jamie and I ran to IKEA near her house to grab a shelf for my house and all I could think the whole time was, “someone has to carry that to the car,” and, “someone is going to have to put that together.” The store wound up being sold out so it didn’t matter but I could’ve carried the box a ways and I could’ve put the bookshelf together, but it sure never feels that way. I’m not sure when I switched from not wanting to ask for help with anything to feeling like I need help with everything, but I don’t like it. I really, really hate feeling helpless but it’s getting more and more common these days. The past several days I’ve been more nauseous than usual, the kind where if I move, talk, or even pay too much attention I get nauseous. The only thing that seems to slow it down is sleeping or completely zoning out and becoming dead to the world, but even those only work for a time. The bad thing is that the thing I want and the thing I need are opposites. I want to engage in life and enjoy the time I have. But in doing that lately I feel terrible and I need to disengage and so I lose track of the world again. I have another CT scan coming up in a few days and that’ll give me a fresh idea of how my treatments are going and I hope it’s good news that will perk me up a little. Throughout my fight with cancer I’ve often said that my situation was win-win because I’d either get healed or I’d get Heaven, but the comedian Macdonald took a little darker, but equally logical stance. “…And I’m pretty sure, I’m not a doctor, but I’m pretty sure if you die, the cancer dies at the same time,” he said. “That’s not a loss. That’s a draw.”
By Dave TaylorDave.hancockclarion@gmail.com
Posted in News and tagged Dave Taylor, stage 4 metastatic esophageal cancer