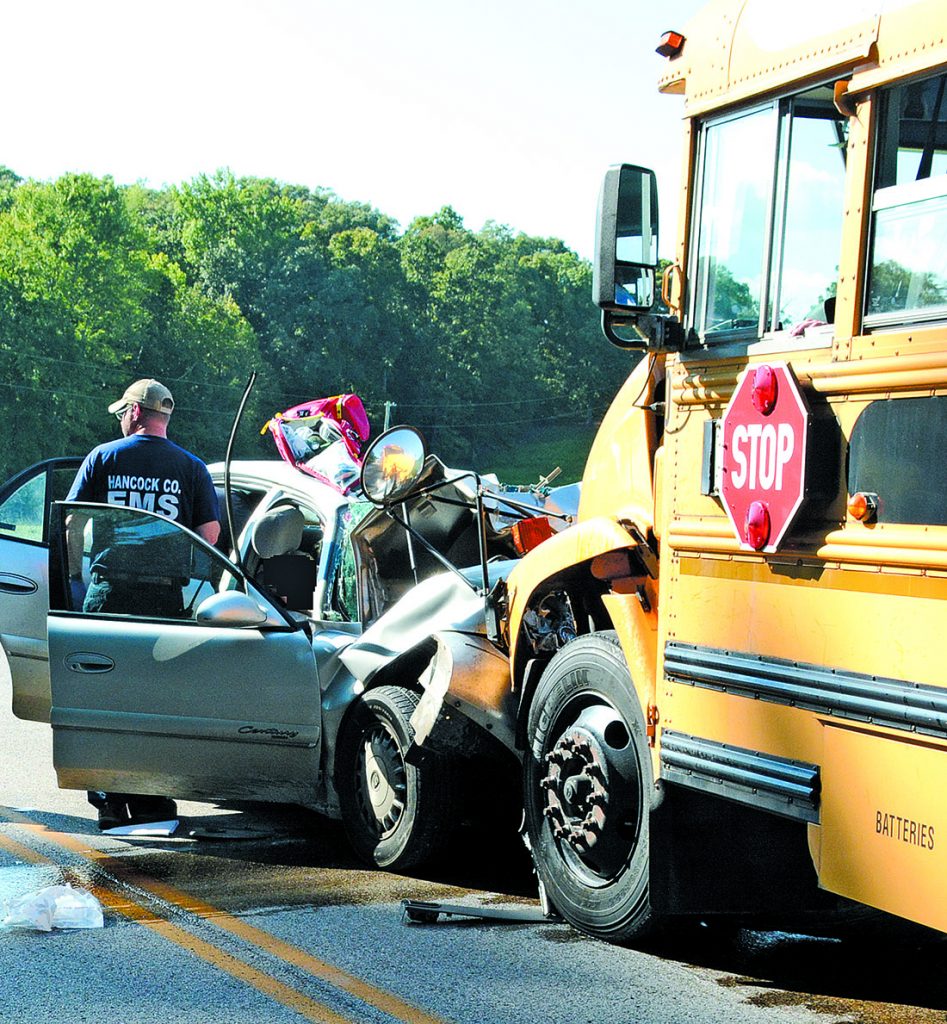 At the time five students, a bus monitor and the driver were on the bus. None of the students suffered injury, and were released to their parents on scene, according to a press release from Kentucky State Police Post 16 out of Henderson. The driver of the bus was Tracy Y. Rickel of Hawesville.

Three juveniles in Elmendorf’s car suffered injury in the accident, and Hancock County Emergency Services transported them to Owensboro Health Regional Hospital from the scene of the accident. The three later were later airlifted to Norton’s Children’s Hospital in Louisville for additional treatment.

Two other passengers in Elmendorf’s car required medical treatment. Ashley James of Cannelton, Ind. and Cody Sipes of Tell City, Ind. were transported to Owensboro Health Regional Hospital. Sipes was later transferred to the University of Louisville Hospital in Louisville. According to the police press release, both were in stable condition.

This tragic accident raises the question of the type of training school bus drivers undergo prior to getting behind the wheel of a bus. Hancock County Schools District Transportation Manager Brice Duncan said the district’s school bus drivers train on numerous safety procedures prior to becoming a driver. He said they train on what to do if a bus catches on fire, if it is in an accident, and several other situations a driver may encounter. Duncan said it is impossible to train for every situation a driver might encounter behind the wheel.

“There is no amount of training to prepare for that situation,” Duncan said referring to the head-on accident last Wednesday. “We have to train the drivers and equip them with the proper safety tools to ensure they make great decisions that keep kids safe on the school bus. We try to make sure our drivers and monitors are trained to do the safest thing no matter what.”

Duncan said part of the training is drilling into a driver the importance of keeping the bus on the road because it is the safest thing to do. He said bad things happen when a bus goes off the road.
“Accidents across the nation over the years show it is not good when a bus goes off the road,” Duncan said. “Before we release anyone to drive, they undergo 60 hours of training.”

Duncan said in addition to the initial 60 hours of training, drivers undergo additional training each summer to keep them abreast of what they need to do in an emergency. Prior to taking out a bus for the first time, a driver has spent several hours with an experienced driver going over different aspects of driving a bus such as turning around, loading and unloading children and learning to drive defensively.

“My driver and monitor did perfect,” Duncan said. “I am so proud of them and how they acted that day.”