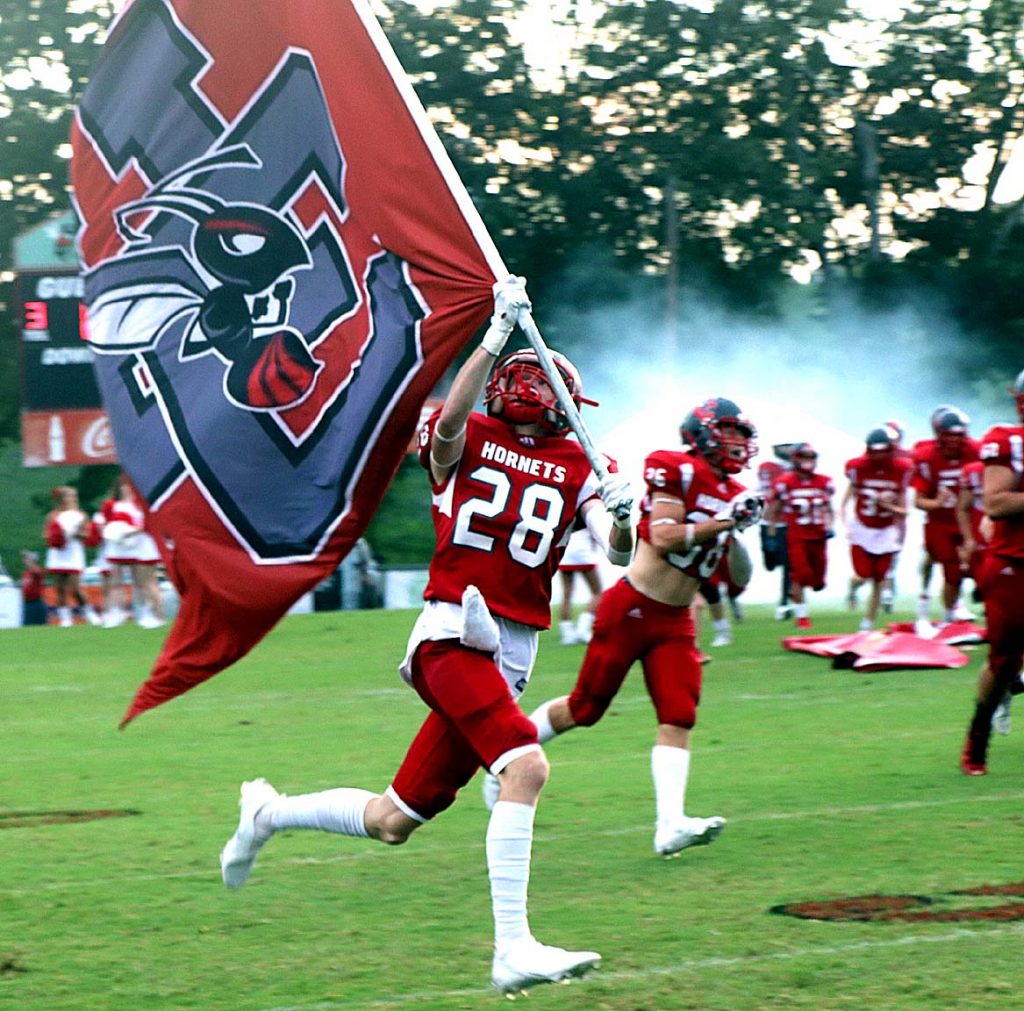 Logan Willis ran over would be tacklers and carried players down the field on his way to 187 rushing yards during Hancock County’s 28-8 win over Muhlenberg County here Friday. The Hornets are unbeaten at 2-0.

“Offensively we didn’t play well in the first half at all, we gave the ball up several times. But we were glad to come back out and battle in the second half,” HCHS coach Bobby Eubanks said. “This was a good early season test and we were really proud of our defensive effort. The boys really came together as a team in the second half.”
Both teams sputtered offensively early on when penalties and turnovers highlighted the first 12 minutes of play.

The Mustangs recovered a fumble early in the second quarter at the Hornets’ 23 yard line. The Hancock ‘D’ stepped up and hard hits by Jack Duncan and Noah Mize set up a fourth down try. Muhlenberg quarterback Alex Revelette was under pressure when he rolled to his right and found Brayden Lovan open in the end zone. The 10-yard TD pass followed by a successful 2-point conversion gave the visitors an 8-0 lead with 7:32 remaining in the first half.

The Hancock offense had ran only a handful of plays thus far and it got worse when the Hornets fumbled the ensuing kickoff. The football was recovered by the Mustangs at the Hancock 41 yard line.

Muhlenberg advanced the ball to inside the Hornets’ 20 yard line when the home defense dug in. A sack by Aiden Weatherholt pushed the visitors back, then moments later Christian Richards broke through the line and slung Revelette to the ground for another Hornet sack.
The Hornets took over at their own 21 yard line after the Mustangs were forced to punt. The home team had 2:44 remaing on the clock.

On the first play Willis took a pitch from Cole Dixon and after finding a big hole on the right side the junior fullback raced up the field for a 28 yard gain. Dixon then rolled left and completed a pass to Landyn Emmick at the Muhlenberg 40 yard line.

Austin Volocko then made a great catch on the sidelines and the Hornets had a first–and–10 at the 15 yard line with just over a minute on the clock.
Dixon picked up five yards and with the clock still running the QB looked to pass. Dixon looked left then decided to run around the right side. He slipped a tackle and crossed the goal line for the touchdown. The conversion failed, but the Hornets were on the scoreboard, trailing 8-6 at intermission.

“They (Muhlenberg) should have been up two or three scores but they only got one. That goes to show how well our defense was playing,” Eubanks said.

Second half
Hancock County received the ball to begin the second half and marched down the field despite fumbling the ball three times. All three drops were recovered by the offense and the home team had a first–and–goal inside the 10. Mize then took a pitch running right, but fumbled and this time the visitors made the recovery.

The Hornets defense saved the day and forced a three–and–out by the Mustangs offense. Hancock took over at their own 42 yard line and Willis started hurting defenders. The bruising back pounded his way to a couple of first downs then waved his arms to pump up the Hornet crowd… and they responded.

Willis later found a nice hole made by the offensive line and he was off to the races. A great downfield block by Duncan helped spring the 28-yard TD run by Willis. The score gave the Hornets a 12-8 lead that they would not relinquish.

Weatherholt then delivered a hard blow on the kickoff that forced a Mustang fumble. Alex Basham recovered the ball and the Hornet offense was in business at the visitors 38 yard line.

Willis took a handoff running left through a nice hole. He picked up good yardage before running over a defender at the 15 yard line. Mize ran the ball down to the six and Willis later scored on a 3-yard TD run. Kaleb Keown scored on a conversion run that put the Hornets ahead 20-8 with a minute remaining in the third.

The Mustangs next drive carried over into the fourth quarter and Basham made a big sack for the defense that set the visitors back. Braydon Wathen and Jaxson Morris assisted on the play and Muhlenberg had to punt the ball back to the Hornets.

Another impressive run by Willis gave Hancock a first down in Mustang territory. The Hornets advanced the ball to the 34 yard line when Mize took a pitch running left. The senior speedster darted down the sideline until being knocked out of bounds at the four. The offense was pushed back on a penalty and eventually turned the ball over on downs.

The Hancock defense allowed nothing and after a forced fumble it was Basham again on the revovery at the 10 yard line. Two plays later Mize was in the end zone after a hard run around the left side. Dixon then threw a jump ball to Keown who made a circus catch for the conversion and the Hornets claimed another victim.

“We challenged the guys at halftime and they responded well,” the coach said. “We still had some ball security issues in the second half but we got on a lot of those and we scored some points.
“Willis played well. He’s a load and you have to tackle him with more than one guy… and sometime that’s not even enough.”

Coach Eubanks also praised his offensive line for their play.
“They get off the ball low and fast and they get into players before they know what’s going on. That’s something they’ve worked hard on since January to improve themselves.”