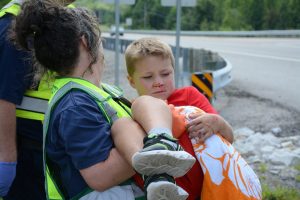 Cyndi Murphy with Hancock County EMS carried Kaeden Finley to an ambulance after examining him for injuries after an accident on U.S. 60 Tuesday morning.

According to the report, Winfield “Bud” Barnett of Hawesville went to turn left onto U.S. 60 from the intersection with Hawes Blvd in his 1978 Chevrolet pickup, and failed to see an approaching west bound vehicle. The driver of the westbound vehicle, Cheryl L. Bryant of Hardinsburg, said as she approached the intersection with Hawes Blvd in her 2005 Chevrolet Cobalt, Barnett’s truck pulled out in front of her and she could not avoid hitting the truck.

A Virginia man escaped injury when his car spun out of control and hit a guardrail on state Route 69, one mile south of Hawesville. The accident happened on August 9 at approximately 1:30 p.m. Hancock County Sheriff’s Deputy Aaron Emmick filed the accident report.

Caden P. Fendel, of Virginia Beach, told Emmick that as he drove north on state Route 69 in his 2010 Mitsubishi Galant the wet road caused his car to start to fish tale and his car spun around backwards. The car, facing south in the northbound lane, slid into a guardrail beside the roadway.

Thomas E. Fox told Burton that as he drove a 2014 Ford Transit Connect van west on U.S. 60 a white sports motorcycle driving too fast for the conditions blasted by his van, and side swiped the vehicle while changing lanes. The motorcycle fled the scene, and the rider was unable to be identified.

The van sustained minor to moderate damage to the front left portion of the vehicle, but remained in working order.