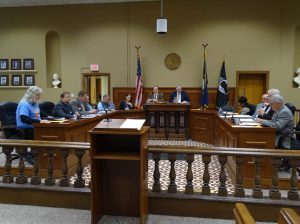 At Monday morning’s Hancock County Fiscal Court meeting, magistrates questioned why the county pays the insurance premium for the fuel tanks at the Hancock County Airport. The yearly premium totals $3,733 each year for three years.

“I just have some questions about it to start with,” Magistrate LT Newton said. “The airport was supposed to get to the point to where they were self-sustaining; are they ever going to get there?”

“I wonder how much fuel they are selling and what kind of profit margin they are making?” Newton asked. “If they are not making enough profit to cover this insurance it is kind of a bad deal there. They will just have to quit selling.”

“Melissa, are you saying that we can’t refuse to insure that?” Newton asked.

Johnson told Newton that was her question.

Magistrates continued to discuss the issue for several minutes and came to the general conclusion that the county had to pay the premium because the county would ultimately be liable if something happened at the airport.

“If it is, we better not let it run out,” Magistrate Mark Gray said. “Do you want to take a chance?”

Newton said he wanted to see information concerning fuel sales at the airport, and Judge Roberts told Newton he would get the information and give it to him.

“I would like to have one of their representatives up here,” Newton said.

After several more minutes of discussion, magistrate Wayne Hodskins made the motion to pay the insurance bill, and Gray provided the second. The motion passed on a 5-0 vote.